The word fraction derives from the Latin word “Fractus” meaning broken. It represents a part of a whole, consisting of a number of equal parts out of a whole.
E.g : slices of a pizza.

A fraction is represented by 2 numbers on top of each other, separated by a line. The number on top is the numerator and the number below is the denominator. Example :34  which basically means 3 parts out of 4 equal divisions.

Fractions on the Number Line

Fraction as an Operator ‘Of’

The ‘of’ operator basically implies multiplication.

Reciprocal of a Fraction

Division of a fraction by a whole number: we multiply the fraction with the reciprocal of the whole number.
Example : 811÷4=811×14=211

Division of a fraction by another fraction : We multiply the dividend with the reciprocal of the divisor.
Example : 27÷521=27×215=65

Mixed fractions are a combination of a whole number and a proper fraction.
Example : 435 can be written as 835.

Like fractions : Fractions with the same denominator are called like fractions.
Example : 57,37. Here we can compare them as  57>37

Decimal numbers are used to represent numbers that are smaller than the unit 1. Decimal number system is also known as base 10 system since each place value is denoted by a power of 10.

Multiplication of decimals with decimals : 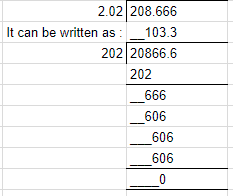