Amino acids have two functional groups present in one molecule which is of opposite nature. One is amino group show basic nature and another is acidic carboxyl group. Therefore, amino acid molecule exists as a dipolar ion also called as zwitterion in which amino group converts in ammonium ion (NH4+) and carboxyl group changes to carboxylate ion (-COO–). The overall molecule is neutral in nature due to the presence of opposite charges.

During the electrolysis of amino acid solution, the movement of ions depends upon the pH of medium. In acidic medium, amino group converts to ammonium ion and molecule converts to cation which mover towards the cathode. On the other hand, in basic medium carboxyl group convert in carboxylate ion and show the movement towards anode.

What is Aspartic Acid?

“Aspartic acid is a natural dibasic amino acid with two carboxyl groups (one on alpha carbon atom and another in side chain) and also called as amino succinic acid.”

Some other food sources of aspartic acid are as follows.

The aspartic acid plays a very vital role in the Krebs cycle or citric acid cycle, in which it involved in the formation of other biochemical and amino acids like asparagine, methionine, isoleucine and arginine, threonine, lysine , are synthesized.

This acidic amino acid also involve in the treatment of chronic fatigue. Aspartic acid initiates the movement of the coenzyme NADH or nicotinamide adenine dinucleotide molecules from the main cell body to its mitochondria and then use it to produce adenosine triphosphate (ATP) which acts as fuel powers for all cellular activity.

It also involves in some of the biochemical reactions for the removal of excess toxins like ammonia from the cells, found to be very damaging to the brain, nervous system and liver.

In the conditions of body stress, like other non-essential amino acids, the extra dose of aspartic acid will be helpful which generally provided by protein supplements often marketed as energy boosters.

Due to the presence of negatively charged carboxyl group, it is found almost at the surface of proteins. The charged group can form an ionic bond with various metal ions as well as dipole interaction with water which is an important concept of solubility of amino acid in water. The isoelectric point of aspartic acid is 2.77 because of two carboxyl groups in the molecule. 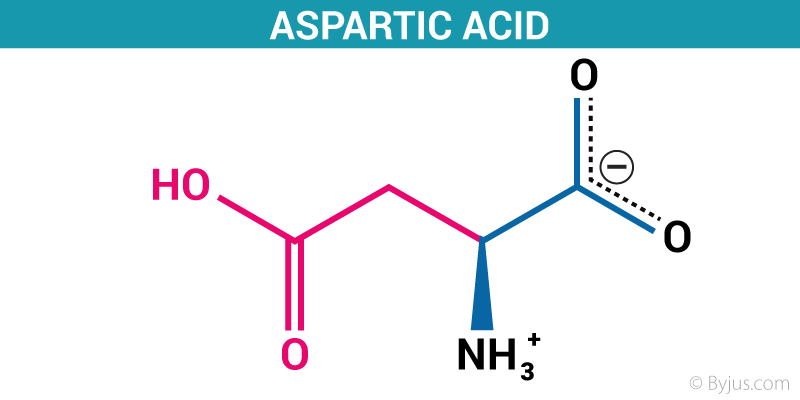 The iso-electric point is equal to half of the sum of pKa1 and pKa3.