Line graphs are one of the most common types of questions in the CAT data interpretation section. These questions are easily solvable and scoring. Also, if one is good with calculations and approximations, solving these questions can be extremely easy and fast. To help the CAT aspirants prepare this topic, a detailed explanation is provided here along with solved examples and important tips.

What are Line Graphs?

A line graph, also called a line chart is one of the basic charts to represent a set of data pictorially. In line graphs, a straight line segment connects data points (called markers), to represent a continuous change over a period of time. Since the data points show the information, line graphs are also known as point to point graphs.

As line graphs show continuous change, they are basically used to compare changes over the same period of time for more than one group. Generally, independent data (or variable) is rendered in the horizontal axis whereas, the dependent variables are placed in the vertical axis. An example will explain this topic in a better way.

The birth and death rates of a particular city are given below. Study the chart carefully and answer the given questions. 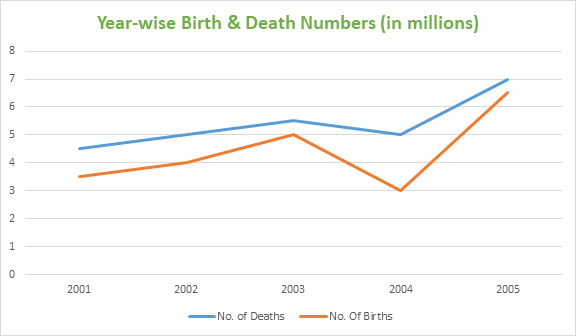 Calculate the average number of births in the city between 2001 to 2005.

From the graph, calculate the values of total births between 2001 to 2005. Then find the average of them.

Hence, option (c) is the answer.

By what percent (approx.) did the number of births increased in 2005 from the previous year?

At first, the increase in births has to be calculated.

First, the total deaths and births over the years have to be calculated.

Total births over the years = 22

Hence, the correct answer will be an option (a) i.e. 5 million.

In which year the percentage increase in birth rate over the previous year was the maximum?

For this question, one can either calculate the percentage increase in each of the years or can just approximate to arrive at the right answer.

To calculate percentage increase every year, one can use the following formula:

For a certain year, percentage increase or decrease = (difference of values from previous year/ value in that year) × 100.

It can be seen that the percentage increase was highest in 2005 and so, option (e) is the correct answer.

From the diagram, check where the slope of the line graph is the highest. First, ignore 2004 as it saw a decline in the birth rate. Now, it can be easily seen that, in 2005, the line graph took a sharp turn upwards. So, 2005 had to be the year when the percentage increase in birth rate over the previous year was the maximum.

One should never ignore line graph topics as most of the questions are easily solvable and scoring. Some important tips are given below to help the individuals prepare and attempt line graph questions easily and efficiently.

To solve line graphs, some basic mathematical concepts like percentages, profit and loss, etc. are required. Be thorough with those basic maths concepts and their related formulas beforehand. By getting well versed with the basics, one can also get confident in using shortcuts while solving the line graph questions in the CAT exam.

To excel in solving line-graph questions, proper practice is extremely important. It is suggested to practice several variations of line graph questions to be able to tackle any question from this topic easily. Also, solve previous year questions and take mock tests to get completely acquainted with these questions.

Often, a question can be easily solved by just analyzing the graph properly. An example of this has been explained in one of the above examples (question 4). So, it is suggested to look at the graph properly, especially the slope of the graph. By seeing the slope, one can easily understand the trend of the graph at that point (positive or negative) and answer certain questions easily.

It is suggested to be confident with the line graph topic as questions from this topic is repeated almost every year in the exam. The questions are high scoring and can be easily solved. Visit data interpretation questions for CAT to solve more questions on this topic.