Best Known Science Subjects to Be Studied in Germany 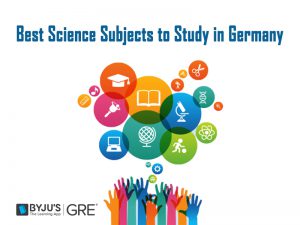 The German Education system is usually divided into three parts. The Technische Universität (Technical University), Fachhochschule (University of Applied Sciences) and Colleges of humanities and arts.

1. Mechanical/ Automobile Engineering: Presently, engineering is the biggest and most popular profession across the globe. According to the Times ranking, out of the top 100 universities for engineering four are German universities, which includes Munich’s Technical University in the 26th position, next comes the Technical University of Darmstadt, the RWTH Aachen, and the Karlsruhe Institute of Technology. Whereas, according to the QS list, seven German universities are present in the top 100 college list for mechanical engineering. Germans have always showcased that their engineers are the best through the various inventions made by them ranging from cars to the radio controlled watch.

2. Computer Science Engineering: The computer science engineering degree has gained much importance in the German educational culture recently. With the industry starting to prefer inter-disciplinary graduates, students who have a mixture of mechanical, electrical, electronics and computer science, as course subjects are reaping the rewards. Some top German universities for Computer science degrees are Ludwig Maximilian University of Munich, Technical University of Munich and Ruprecht-Karls-Universität Heidelberg.

Applied Sciences relates to the art of applying scientific knowledge to practical problems. The subjects under applied sciences are natural sciences like physics, chemistry and biology. The industry is starting to prefer new-age interdisciplinary degrees like Biotechnology, Bio-informatics, etc.

1. Physics: Till now 102 Germans have won the Nobel Prize, out of which 31 has been won the accomplishments for inevitable contribution in Physics. According to the QS ranking, in the list of top 100 universities for Physical Science, seven are German universities, whereas, LMU (Munich’s Ludwig Maximilian University) stands proudly on the global university ranking list. Physics is the subject that is in the high demand in Germany. Some of the famous physicists that Germany produced are Max Planck who introduced of Quantum Physics, Wilhelm Roentgen, the discoverer of X-Rays and many more glorious  scientists.

2. Chemistry: Alike Physics, Chemistry is equally the most readed subject in Germany. Till date 30 Nobel Prizes have been bagged by the German chemists. Stefan Hell, the most recent chemist who won the Nobel Prize in 2014 for developing super-resolved fluorescence microscopy. According to the QS ranking, in the list of top 100 universities for chemistry, seven are German Universities. Germans have already demonstrated their expertise in chemistry by inventing Morphine And Aspirin.

3. Medicine/Life Sciences: According to Times ranking, three German universities make into the list of top 100 health and medical universities, while four German colleges are on the list for studying life sciences. Heidelberg is the German university that tops both the ranking. After physics and chemistry, this is the field Germans have won the most Nobel Prizes with the number rising to 24. Some of the discoveries made German doctors’ include adhesive bandage and Alzheimer’s disease.

Colleges of Humanities and Arts

1. Philosophy: If you ask any person to give the name of one famous philosopher, then it shouldn’t come as a surprise if the person is German or holds some relation from Germany. Germany has earned a good name in philosophy, and in the QS ranking of top 100 philosophy colleges, 11 are German university.

3. Literature: The Berlin’s Free University, Heidelberg, Humboldt, and Munich’s LMU are some of the universities that are considered to be the best for studying humanities and arts, across the globe. With vast culture and diverse history, many foreign writers have been attracted to this beautiful land which is the birthplace of some great scholars likely, Goethe, Schiller, and Grass to gain inspiration. In the field of Nobel Prize for literature, Germany has bagged ten prizes till date.

Byju’s will be glad to help you in your GRE preparation journey. You can ask for any assistance related to GRE from us by just giving a missed call at +918884544444, or you can drop an SMS. You can write to us at gre@byjus.com.