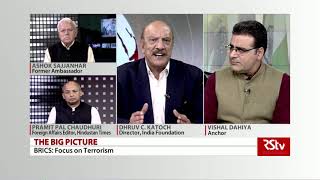 Rajya Sabha TV programs like ‘The Big Picture’, ‘In Depth’ and ‘India’s World’ are informative programs that are important for UPSC preparation. In this article, you can read about the discussions held in the ‘Big Picture’ episode on “BRICS: Focus on Terrorism” for the IAS exam.

Details regarding the Discussion:

Highlights of the Brasilia Declaration:

Significance of the Brasilia Declaration:

The Approach of Nations towards Terrorism:

The crux of the 11th summit of the BRICS against terrorism is that while these five nations might have their own different threats as far as terrorism is concerned, but going by the economic and humane costs of the threat of terror not only these five nations, but the entire world seemingly will have to come together and fight the issue of terror with all its might.