5. Two genetic variants up the diabetes risk in Indians

6. A plant that makes cameo appearance when rain subsides

4. Free Basics, now through the backdoor

1. If we had maintained the momentum of 1991, we could have achieved much more: C Rangarajan

a) Kerosene price hiked; is it just a sparrow or a spring

b) Centre must contain fiscal deficit; here’s why 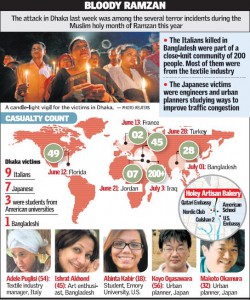 (CFCs are released by products such as hairsprays, old refrigerators etc)

5. Two genetic variants up the diabetes risk in Indians

6.A plant that makes cameo appearance when rain subsides

4. Free Basics, now through the backdoor

3. To Read : In fact: 49 years before Tejas, India had its own fighter — Marut
Others:
a) India’s pharmaceutical exports continued its lead over China in 2015

During the meeting, the leaders noted that India-Sri Lanka Free Trade Agreement, made operational in March 2000, has been beneficial to both countries. Both leaders discussed several issues related to bilateral trade and investment.

The leaders reviewed progress of the proposed Economic and Technology Co-operation Agreement (ETCA) between India and Sri Lanka and agreed to start negotiations on an expedited track for an early conclusion of the Agreement, preferably before the end of the year. They noted that an Indian delegation is visiting Sri Lanka shortly in this regard. The leaders agreed that early harvest measures may be negotiated but these would come into effect on the date the Agreement comes into force. Sri Lanka appreciated the workshop organised by India in Colombo on 4th March 2016 to increase awareness about Indian Standards and Regulations and resolve the perception about application of Non-Tariff Measures by India against Sri Lankan exports.

India has said that cooperation in finance and technology is needed to take further actions on climate agreement. In his opening remarks at the joint press conference at the Seventh St. Petersburg Dialogue in Berlin, Germany, Minister of State (Independent Charge) of Environment, Forest and Climate Changesaid that pre-2020 actions are important.

2. The Financial Express:
a) Kerosene price hiked; is it just a sparrow or a spring

Essential commodities and fuel on trucks waiting to be transported to Tripura are stuck, literally, on National Highway 8 after incessant rains damaged many portions of the arterial road.

The lack of movement of vehicles on the Assam-Agartala National Highway has caused widespread distress across the State, with reports claiming that petrol prices have shot up to Rs. 250 per litre in some areas of the State. The revised Inland Water Transit and Trade Protocol (IWTTP) with the provision of third-country access would allow taking essential commodities to Tripura, including fuel and foodgrains, by using the waterways of Bangladesh through Ashuganj port on the river Meghna

Investigators probing the Dhaka terrorist attack are beginning to suspect that the militants who carried out the strike may have gone abroad to receive arms training and that they may have been influenced by the words of Mumbai-based preacher ZakirNaik and radical British cleric Anjem Choudary.Meanwhile, Pakistan has described allegations levelled by prominent members of the Bangladesh government that it was involved in the attack as “highly regrettable and irresponsible.”

The Lashkar-e-Taiba (LeT) has put out posters asking locals in the town of Pampore in south Kashmir to provide them with the phone numbers of Army and police informers so that they can be tracked and “action” can be taken.“We have collected enough information about the Army and the STF sources. The action will be followed soon. We appeal people to share the numbers of such sources [informers] so that we can track them through our tracking system and take the action required.”

These posters have come at a time when the security forces has stepped up counter-insurgency operations in south Kashmir, inflicting heavy casualties on the Lashkar and the Hizbul Mujahideen.

Companies raised as much as Rs.5,855 crore through initial public offers (IPO) in the first three months of the current financial year, the highest quarterly mobilisation in nine years.

According to Prime Database, a primary market tracker, the three-month period between April and June saw six main board IPOs and as many as 13 offers in the segment for small and medium enterprises (SMEs).