1. Turkey willing to cooperate with U.S.

2. Uranium supply to India from Canada

Note – Syria’s opposition made a fresh call for a transition to democracy without President Bashar al-Assad, as France threw its support behind new Russia-US talks aimed at ending the war. The opposition hopes new talks would result in an 18-month transition that would see Syria governed by a transitional body made up of opposition figures, current government representatives and members of civil society.

The opposition’s proposal during talks in London came as the world’s chemical weapons watchdog – OPCW (Organization for the prohibition of Chemical weapons) said it was disturbed by the alleged use of toxic chemicals in the battleground city of Aleppo.

Russia and the US are seeking to revive a ceasefire in Syria and coordinate strikes against the Islamic State group and other jihadists. France now has joined hands with US and Russia.

Note – Canada has 2nd largest Uranium reserves in the world after Australia.

Note – Under the new civil aviation policy, India plans to enter into open sky air service agreements (ASA) with SAARC countries and with countries beyond 5,000 km radius from Delhi. Countries sign ASAs through bilateral negotiations to decide on the number of flights that airlines can fly into each other’s countries. Under the open sky pact, there is no restriction on flights or seats.

The centre-piece of the policy is to make regional air connectivity a reality.

The policy aims to make flying to the masses easy and accessible by making it affordable and convenient, establish an integrated eco-system which will lead to significant growth of the civil aviation sector to promote tourism, employment and balanced regional growth, enhance regional connectivity through fiscal support and infrastructure development and enhance ease of doing business through deregulation, simplified procedures and e-governance. The government expects the number of tickets sold to go up to 30 crore by 2022.

Connecting the unconnected and serving the un-served is the motto of the civil aviation policy.  The questionable legacy of the ‘5/20 rule’ has been done away with. According to the ‘5/20 rule’, a 2004 norm – a domestic airline is allowed to go international only after flying for five years to domestic destinations and operating at least 20 aircraft.

Goods and Services Tax – It is a tax levied when a consumer buys a good or service. It is meant to be a single, comprehensive tax that will subsume all the other smaller indirect taxes on consumption like service tax, etc. An ideal GST regime intends to create a harmonised system of taxation by subsuming all indirect taxes under one tax.  It seeks to address challenges with the current indirect tax regime by broadening the tax base, eliminating cascading of taxes, increasing compliance, and reducing economic distortions caused by inter-state variations in taxes.

122nd Constitutional amendment bill was introduced in the Parliament in 2014. The Bill amends the Constitution to introduce the goods and services tax (GST).

Highlights of the bill:

It is designed for long-range anti-submarine and anti-surface warfare, shipping interdiction, electronic signals intelligence role as well as armed intelligence, surveillance and reconnaissance missions. A derivative of Boeing’s Next-Generation 737-800, P-8 is capable of broad-area maritime operations.

P-8I – The p-8 aircraft has been ordered by the Indian Navy as the P-8I Neptune. It combines superior performance and reliability with advanced mission systems that ensures maximum interoperability in the future battle space. The contract is another example of Indian companies becoming part of the global supply chain and manufacturing aerospace parts for the world’s most advanced products.

Current status: India allows foreign companies to invest only up to 51% in multi-brand retail while it has removed the cap on single-brand retail.

FDI – The Foreign Direct Investment refers to the direct investment into the production and management. This can be one by either buying a company or by expanding operations of an existing business. One example is Unilever which has its own subsidiary and long term investment here via its subsidiary Hindustan Unilever. This means that FDI brings foreign capital, technology & management and hence, it is considered as the most attractive type of investment for emerging economies, especially for India where the domestic savings have not been large enough to wholly meet investment requirements, FDI is also less volatile than FPI and doesn’t create debt like FPI and is not subjected to quick reversals.

Single Brand Retail: It is a business which sells goods to individual customers (not other businesses) and all such goods are sold under the same brand. Example – Levis sets up stores in India in which the foreign parent of Levis invests in India. Such stores can only sell Levis products under the ‘single brand’ route.

We are increasingly told that the inflow of capital – particularly the foreign direct investment (FDI) variety increases employment levels and contributes to economic growth. In a rare interview given by Prime Minister Narendra Modi reinforced the role of FDI for India: ‘To set a strong foundation for sustainable growth, we have run the most prudent macro-economic administration in decades, reducing fiscal and current account deficits. We have made India a destination which welcomes capital by liberalising foreign-direct investment policy, increasing the ease of doing business.’ Recently, the government further relaxed the FDI policy. An FDI mania appears to have gripped our policymakers.

One central character of private investment makes it unreliable in the long term: volatility. Rational investors are constantly in search of countries, regions, sectors, ideas and processes which will yield higher profits. Globally, countries formulate competitive policies to solicit foreign capital/investment by proffering a variety of economic concessions — tax holidays, providing land at less-than-market prices, weakening workers’ rights, easing the patenting of ideas and processes, and so on. In India, such concessions are being given in the name of ‘ease of doing business’ and the ‘Make in India’ campaign. This “international competition for capital” tends to exacerbate income inequality, which is what Thomas Piketty rightly highlights in his book Capital in the Twenty-First Century.

A probable positive consequence of foreign investment is the inflow of new technology and its subsequent diffusion. However, technology diffusion is not at all certain, especially because it is in the interest of the foreign firm to withhold profitable technology. Moreover, the diffusion of technology is difficult in countries like India where the state of both physical and human capital is not yet on a par with advanced countries. Therefore, relying on foreign investment in the long term is not an economically sound policy. Policies must be undertaken to revive domestic private investment. The lowering of interest rates may not suffice in the current situation of aggregate demand deficiency, a consequence of weak foreign demand as well as poor domestic rural demand because of two consecutive monsoon failures. One long-term solution is substantial public investment in education, health and environment, which will not only improve India’s socio-economic condition but also crowd in domestic private investment.

Nature of FDI in India – 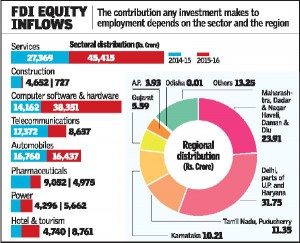 In 2015-16, the services sector received the largest FDI equity inflow; this sector includes services such as finance, banking, insurance and outsourcing and predominantly employs skilled workers. Of utmost concern is the stark reduction in FDI in the construction sector — the rate of decrease is close to 85 per cent. The implications for labour employment in this sector cannot but be negative.

While the overall FDI equity inflow has increased between 2014-15 and 2015-16, the changes in the composition of FDI, as expected, are worrisome. Of course, the aim of FDI is profit, not employment. Therefore, the pursuit of full employment of labour cannot be left to the private sector, whether domestic or foreign.

The employment effects of investment undertaken in an urban settlement differ from that in a semi-urban and rural settlement. Just as India competes with other countries, Indian States compete among each other to get FDI; the regional distribution is very unequal. As the U.S. Ambassador to India, Richard Verma, said while visiting Bhubaneswar in January 2016, “While private investment from the U.S. continues, Odisha has to compete with other Indian States and countries like Singapore through ease of doing business to raise the volume.”

Clearly, Mumbai and Delhi dominate the other regions by obtaining close to 50 per cent of the overall FDI equity inflow whereas Odisha receives less than 1 per cent. FDI inflows therefore worsen existing regional inequalities by making the rich regions richer and poor regions poorer (as the workers migrate in search of employment).

Public expenditure is the key – Private investment in general is volatile. Foreign private investment is more volatile because the available investment avenues are significantly greater (i.e. the entire world). Therefore, the responsibility of providing employment cannot be left to FDI. Despite the probable gains accruing from the diffusion of new technology, the existing state of physical and human capital in India may prove inadequate for the diffusion, at least for now. As expected, the current FDI equity inflows are volatile over time and across sectors and regions, which is a necessary consequence of their search for the highest returns. The adverse consequences are unstable employment and an accentuation of income and regional inequalities. Besides these adverse economic consequences, there are others – most notably, the issues of stagnant real wages and ecological destruction. In sum, howsoever economically beneficial FDI may seem in the short period, it has long-term adverse consequences for the economy. A government committed to the long-term economic health of India must therefore increase the quantity and quality of public investment.

b) Manufacturing and construction