Recommendations of the committee:

1. India among the worst affected by climate change: IMF study 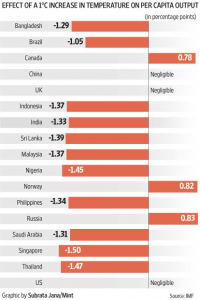 Affect on India and its neighbors In a Safe Lane- The Hindu

There is some concern that the move to amend Motor vehicle Act overly emphasizes the concurrent jurisdiction of the center at the cost of State powers ,but the proposed changes comes after a long consultation exercise

Arsenicosis or Black foot is caused by exposure over a period of time to Arsenic in drinking water. It may also be due to intake of arsenic via food or air. Kindly note that Itai-itai disease is caused by Cadmium poisoning.