1. In a first, Mallya declared a ‘fugitive economic offender’ 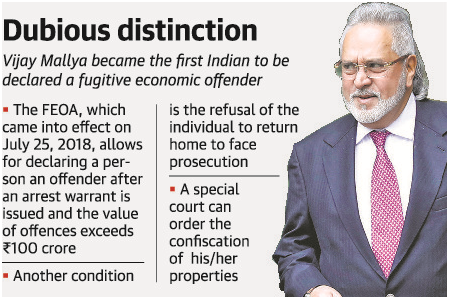 Significance of the act

Some concerns with the scheme

1. Barred at the border: record arrests of Rohingya in 2018

1. The lowdown on blood transfusions

Process to be followed:

A Brief Note on the Fauti Masjid

A troubled and short-lived reign

Details of the study

So what caused such a drastic change in climate?

The funds for this project will be shared by World Bank, State Implementing agencies and Central Water Commission.

India is the chairman of the body. Head Quarters-Asian Institute of Technology, Pathumthani, Thailand. It was created after 2004 Tsunami which bought together countries of Asian-Africa.

Article 280 of the Constitution provides for the formation of the Finance Commission after the expiration of every fifth year of at such earlier time as President considers necessary. Its main function is to submit recommendations to the President regarding the allocation of net proceeds of taxes between the Union and the States and the method of distribution among the States. It may be mentioned that the first Finance Commission was wet up on November 22, 1951, in the Chairmanship of K.C. Niyogi. The Committee submitted its recommendations in 1953.

Seventh Schedule of the Constitution is for distribution of powers between the Union and the States. There are 3 lists under this- Union List, State List and Concurrent List. According to the question, the tax imposed on the stock market and futures market belong to the Union List. However, under Article 268 of the Constitution, such taxes are imposed by the Union Government but are collected and appropriated by the States.