We have often heard that India is a democratic country. But is our understanding of democracy accurate? Why is India considered to be the largest democracy in the world? The answers to these questions will be cleared through the following democracy in India essay.

We can say that the end of the British colonial rule in 1947 marked the beginning of a new ruling regime in India where the citizens had the freedom to choose their leaders. With this effective rule, people were no longer oppressed, and they had the power to elect their government whom they thought would work for their welfare. This essay on democracy is an ideal introduction for young children to know the meaning and significance of democracy in India. 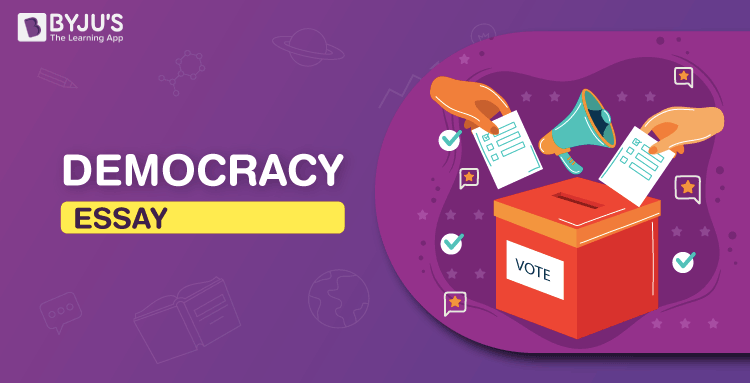 Democracy is the highest form of government where citizens have the authority to make decisions and select their representatives. In the case of anarchy or monarchy where there is no ruler, or there is absolute power with the King/Queen, people would turn out to be violent, or they do not usually get what they want.

Since people are at the centre stage of democracy, they will exercise free will and have equal rights. As citizens elect their representatives, everyone has a role to play in contributing to the overall development of the country. All citizens are treated equally in a democracy, and none of them will have any privileges, nor would they be discriminated against based on caste, gender, religion, race etc. A democratic nation takes into account the differences in people and accepts them to ensure that the country is not suffering.

India is a democratic country as people get to vote for their preferred leaders when they reach the age of 18. Democracy in India works on 5 main principles, which are sovereign, secular, republic, socialist, and democratic. Even though India is hailed to be the largest democracy, certain challenges prevent democracy from being experienced in its wholeness. Issues like corruption, bribery, and caste system often hinder the working of democracy, but democracy in India is far better than in other countries.

Moral of the Essay

The democracy in India essay focuses on the positive sides of democracy that ensures the welfare of the country and its citizens. Democracy guarantees that the rights and wishes of people are well-accounted for and the differences between cultures and people are put aside. It is rightly said that democracy is a government of the people, for the people and by the people. The essay on democracy helps your kid to appreciate the efforts and struggles taken by our national leaders to safeguard our interests. Hence, it must be dealt with delicately and with utmost understanding.

What do you mean by democracy?

Democracy is a government formed by the people, where they elect their leaders and can express themselves freely. Even if you have to show your disagreement, you have the freedom to state it and bring it to the notice of the concerned people.

Why is India considered to be a democracy?

India is the largest democratic country in the world as it freed itself from the clutches of foreign rule when it attained independence in 1947. Since then, every citizen in India has had equal rights, and nobody was treated differently based on colour, race, gender or religion. Besides, people had the freedom to vote for their government as they reached the age of 18.

What are the main challenges faced by democracy?

Despite its various benefits, democracy comes with its fair share of challenges as well. They are corruption, social and economic inequalities, caste system and anti-social elements.