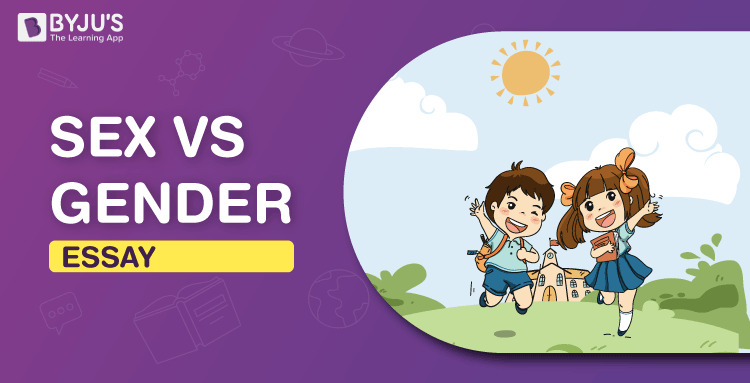 Gender and sex are the two words that are used extensively in our everyday conversation. Understanding the difference between sex and gender is an essential concept for kids. Help them read and understand BYJU’S sex vs gender essay to understand better. Now, let us learn the difference between these two words by reading the essay on sex vs gender.

Understanding the difference between sex and gender can help avoid misconceptions, emphasise gender fluidity, and create awareness about sexual health. Learning this information from a young age makes it easier to accept oneself.

Meaning of Sex and Gender

Sex refers to biological differences in men and women, while gender is a construct of society and culture on the basis of internal awareness or sex. Sex and gender essay helps us understand and learn the difference between these two terms.

Moreover, human bodies can be present in a variety of forms and sex and gender alignments. Also, we refer to a human as an ‘intersex’ when their biological sex attributes complicate sex assignment.

As humans, we often believe that sexual orientation is our primary identity. However, during our lives, we slowly start to realise that our gender becomes a personal choice and an expression of individuality during our lives.

For ages, we have been using the words gender and sex interchangeably. However, with education and awareness, the meaning and the differences have become clear.

Sex is the biological classification of human beings as male, female, or intersex. Gender is often divided into ‘male’ and ‘female’ genders. Gender is a set of socially constructed behaviours, roles, customs, and values associated with either masculinity or femininity.

Furthermore, each person has the freedom to express their identity. When the gender is classified, the primary terms used are transgender, nonbinary, bigender, cisgender and agender. And the term nonbinary refers to those individuals whose gender identities do not line up with the man and woman binary.

To conclude, sex implies classifying a person as male and female based on their physical characteristics. On the other hand, gender is a personal and an internal sense of being a woman or man. This sex vs gender essay is an excellent way to teach kids how to differentiate between these two words. For more kids learning activities like worksheets, GK questions, poems, stories and questions ensure to visit BYJU’S website.

What are the types of gender?

The gender is classified into male, female and transgender.

What does sex mean?

Sex refers to biological differences in men, women or intersex.