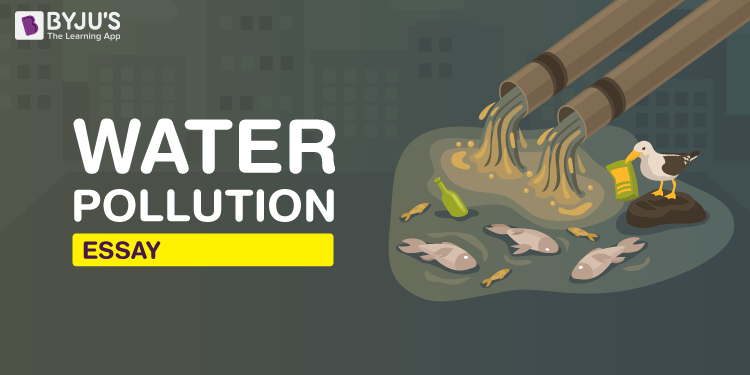 Water is the soul of any living being on the planet Earth. Water gives life to plants, creates energy through hydroelectric power, helps regulate the climate and creates habitats for animal life. There are many other uses for water, like cleaning, washing, cooking and watering plants to balance the ecosystem. However, water has been polluted by humans. By reading BYJU’S water pollution essay, let us learn about the causes and preventive measures.

Water provides us with life and has been vital in sustaining human existence for centuries. Roughly two-thirds of all water on Earth is in the oceans. There are eight sources of freshwater: rivers, ponds, glaciers, reservoirs, wetlands, streams, groundwater and lakes. However, these water bodies are contaminated by releasing industrial wastes, the release of pesticides and insecticides. Water pollution essay in English helps teach kids about the importance of water and the reasons for pollution.

How to Prevent Water Pollution?

There are many ways in which pollution can be caused. Some of the most common causes include industrial waste, pesticides, insecticides, fertilisers and deforestation. People contribute to the problem by discarding anything they don’t want, like plastic bags and batteries, into the water bodies. If you live near a factory or farm, it is essential to be mindful of what is being disposed of and strictly follow the laws.

Another cause is the use of pesticides. The use of these chemicals can cause illness in humans and animals and decrease biodiversity, which has been linked to many other issues.

Chemicals from insecticides can seep into and contaminate groundwater, making even the cleanest water unfit to drink. This can lead to severe health and environmental problems for people, animals, and plants downstream of the contaminated area.

Fertilisers cause water pollution. Nitrogenous fertilisers and phosphates are the leading causes of water pollution. They require expensive machinery for scrubbing and advanced water treatment plants to remove the pollutants and render them safe for people.

After understanding the causes by referring to the causes of water pollution essay, let us know the effects. The effects of water pollution are wide-ranging. The most common result is a decline in the natural oxygen content of the water, which makes it harder for aquatic life to survive. The population of species like fish and coral may decline because they require large quantities of oxygen.

Water pollution is an environmental problem that has many effects. Water pollution causes the death of plants, animals, humans and all other living beings. Fish and mammals may die off due to toxins harmful to them, making it harder for wildlife to survive. In some cases, the pollutants found in water can create an imbalance in the ecosystem, which negatively impacts plants and animals living there. Moreover, this happens due to a lack of environmental awareness.

In addition, water pollution can cause health problems, such as the increased risk of all types of cancer, respiratory and skin diseases, disabilities, and heart diseases.

How to Prevent Water Pollution?

Water pollution and environmental pollution is a widespread problem around the world. There are many ways to prevent water pollution, but the most important ways are to avoid disposing of non-biodegradable waste materials and industrial waste in water bodies, stop the usage of pesticides, insecticides etc. These filters trap particles that may be harmful to humans, such as chlorine and lead. They also filter out chemicals like fluoride, which can lead to cavities.

Another way to prevent water pollution is by ensuring no leaks in pipes or sewer lines and ensuring that waste gets appropriately disposed of.

Why is it essential to prevent water pollution?

It is crucial to prevent water pollution because it releases dangerous chemicals into the environment and has adverse effects on humans, plants, animals, and aquatic life.

Which is the most polluted river in India?

River Ganga is the most polluted river in India.

Water pollution has a lot of adverse effects. It can cause death, illnesses and make people more vulnerable to diseases.