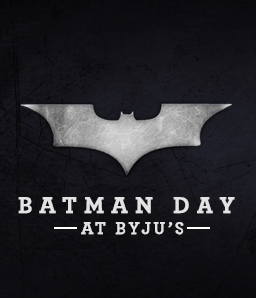 The 26th of September was a pivotal day at the BYJU’S offices, when all BYJUites got a chance to be their favourite superhero – BATMAN.

BATMAN DAY saw some cool Batman T-shirts and costumes around the office and enthusiastic teams posing with life sized BATMAN figurines. To add a cherry on the top, personalised BATMAN cards with quotes from a famous BATMAN character were kept at everyone’s desks. BYJUites had to send in videos of themselves enacting the quote. The competition saw a shower of responses pouring in with some of the most creative and hilarious batman enactments ever.

To end the day with a home run, one of the most popular Batman movies – The Dark Knight was screened in the new BYJU’S cafeteria. BYJUites thronged in to catch a glimpse of their favourite character- The Joker and the excitement about was electrifying.

A perfect way of paying tribute to a character whose legacy has lasted over eight decades.