Lauding the Leader in Chennai – BYJU’S 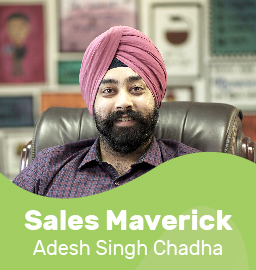 Lauding the Leader in Chennai – BYJU’S

A message he shares with his team. Adesh Singh Chadha is an AVP at BYJU’S.

He heads the Chennai office and has grown it from a humble room to a strength of 200 BYJUites.

In tête-à-tête with Team Storyweavers, we discover the journey of this BYJU’S leader, from a freshman to an AVP. His story is of a man who started with BYJU’S and has grown by leaps and bounds. His triumphs, trials, and inspiration all lead us to BYJU’S.

He has bookmarked 2019 for a special goal. You can’t help but wonder, how he will meet the same along with his growing responsibilities. Here’s a leader who is motivated, enthused and is a pro at spreading his vigour to the entire team.

Meet Adesh and know more about his #lifeatbyjus.

Drop us a mail at recruitments@byjus.com if you too wish to build your career with BYJU’S.

Know more about our #lifeatbyjus here.

A Word slayer, pluviophile, baker, traveller; among other things, knows the correct usage of punctuation and the difference between your and you’re.
She spent some time (read a lot of time) writing, editing and keeping track of word counts. Her trysts with writing and editing has led her to interact with experts from diverse industries like healthcare, wellness, HR, business and technology. Having experienced all that, she continues her professional explorations, to learn, to grow and to be a value add.
Drop in a line at storyweavers@byjus.com if you liked her stories, have something nice to say, or if you have compelling ideas to share!