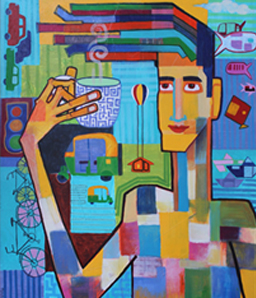 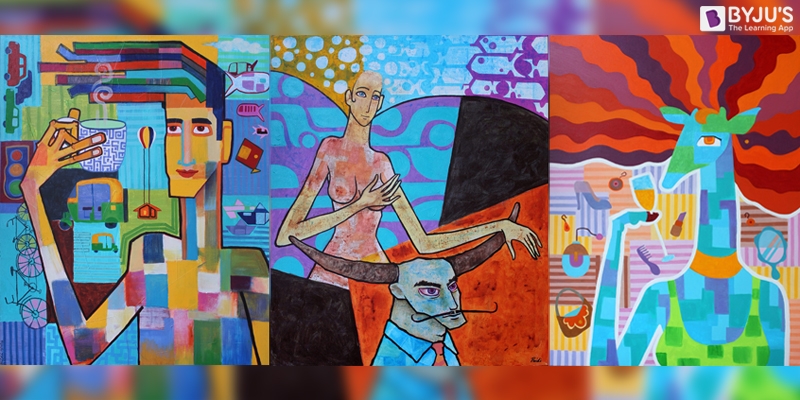 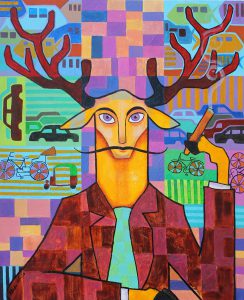 “There is no such thing anymore as the true human. Man is becoming more and more of an animal with every passing day. He depends more on his basic needs and his emotions and principals are slowly fading into oblivion. But even though he is becoming more animalistic, he doesn’t care about the forests from where he emerged. He remains cruel, trying to overthrow the world around him. This is what inspired the – Social Animal”

The expressionist style depicted in the painting above is considerably modern in the style of art that gives an exaggerated version of the world. Paidiraju Kalla, sat beside his father as a child, while he painted his heart out on the canvas using this same style. A generation later, Paidi and his brother, lived up to the family legacy of becoming painters themselves, expressionism being Paidi’s favourite art style. He believes it gives him the platform to reimagine the world around him and add life to it. Hailing from the district of Khammam in Telengana, Paidi discovered the artist in him when in his third grade and currently has over 14 years of work experience in the field. Recalling his first artwork, he states, “The first piece I ever made was a police officer saluting. The drawing is crystal clear in my memory like it was just yesterday that I made it.”

Paidi followed his elder brother and father’s suit and entered the field of art starting with BFA ( Bachelor of Fine Arts) from the city of Hyderabad. Being an ambitious young lad, he started working part time to gain more experience in the field of art and the technology involved with it. His first experience lead him to work as an illustrator for the NGO Aksharadeepam, where he illustrated textbooks for village schools. After the learning the basics of art from his college and NGO experience, Paidi found his calling in animation when he joined an entertainment company. 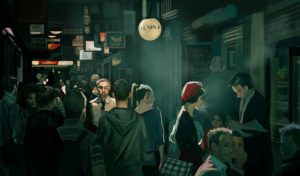 “When I started with my course in college, I did not have many opportunities to expand my learning. Our professors were lax about our field and it was all taken very casually. That is the issue with the Indian education system. Sciences are the only subjects ever given importance. That a person can have other talents, and there is much to be learnt in the field of arts is not given much thought. Though my college days went by without inspiration, I continued to learn and practice on my own. It was only when I started working when I began looking forward to the challenges that I would face as an artist and animator.”

The senior lead artist at BYJU’S believes that there is a thin line that separates designers and artists. There is an artist in everybody, what needs to be found is the right medium of expressing the artist within and the right source of inspiration. Inspiration can strike in the oddest of places and times and from inspiration stem words of love, etheriel strokes of acrylic, notes of joy and moves of devotion. Most artists find favour in nature as they connect to the peace and beauty that revolves around nature, one of the reasons Paidi loves travelling. Though he does not work in natural setups, he memorizes the sights he comes across and if a subject inspires him particularly, he goes home and attempts to recreate it on canvas.

The boxes piled up around his room back in Kammam are evidence of his attachment with past creations. When asked why he chooses to hoard his old artworks Paidi confesses that he has never been truly satisfied with an art piece. “An artist should always keep on learning. There is no limit to his/her creations and the possibilities in terms of artworks and styles. It holds true for other art forms as well, theatre, music, dance and the likes. Learning more will give you more room to experiment and find different ways of expressing yourself.” 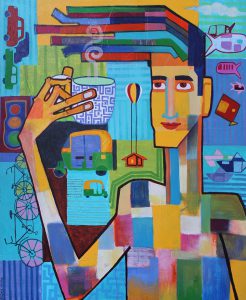 “Sitting out in my balcony, on a considerably pleasant evening, I look down at the sprawling landscape of the city of bangalore. The morning bustle enfolds before me as people, cars, autos and buses unfurl from their houses and corners with the might of an army, ready to take on the new day. I sit in my balcony sipping on my hot cup of tea. Tea is quite inspirational, thus the reason Indians hold it so close to their heart and culture. Many a great stories emerged from a cup of tea and so did my creation – TEA TIME.”

Paidi reflects on how his paintings depict his mood and the environment he is placed in. Living in metropolitans brings out the caustic and darker side of his portrayals. The loud noises, towering buildings, bright lights and smart people- he thinks of all these before starting work on a painting. The underlying thought that clouds all these sentiments is the fact that people are growing , but not in the right direction.

“The world around us inspires us and makes us artists. Observing, learning and loving the outcome is what defines and artist. Despite the ambiance, the restrictions etc, the artists cannot be stagnant at any point.” 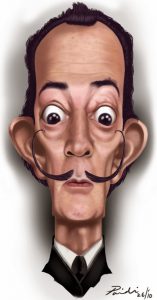 When asked about the current trends in the field of art, Paidi divulges that many artists stay hidden behind the visage of engineers, architects, doctors or journalists. Having considered himself to be out of the lucky few, whose parents were comfortable with him going into the art field, Paidi believes that parents are the main decision makers in a child’s life. Their decisions in his/her early life shape what he eventually becomes. Parents are also the first teachers. They are impressionable, thus hold the immense responsibility of understanding their children and choosing what is right for them. The art scenario in India was richer in the days of yore when culture splurged from every household and skills and talents bore the stature of a family. However with greater ambitions and the thirst for money, culture and art has taken a backseat.

In the next ten years, Paidi sees himself facing a class of your bright faces. He wishes to open a school of his own, inspired by Byju Raveendran himself. “Byju sir has shown me the path towards knowledge. His vision and how he approached it has been truly inspirational for me and I know that it is not impossible to dream big and push those dreams forward towards reality. I wish for art to come back to every household and hope that in the next few years I will be able to inspire students to find their voice in paintings.” says an emotional but determined Paidi.

We with Paidi all the very best for his future endeavors and hope he keeps inspiring others to discover the artist within them.