All the concepts related to the French Revolution are mentioned in the NCERT Solutions for Class 9 History Chapter 1 so that students don’t find it difficult solving the textbook questions. There is a chance that NCERT textbook questions might be asked in the CBSE exam.

Be a step ahead in your studies with these NCERT Solutions for Class 9 History that are well-structured and comprehensive. 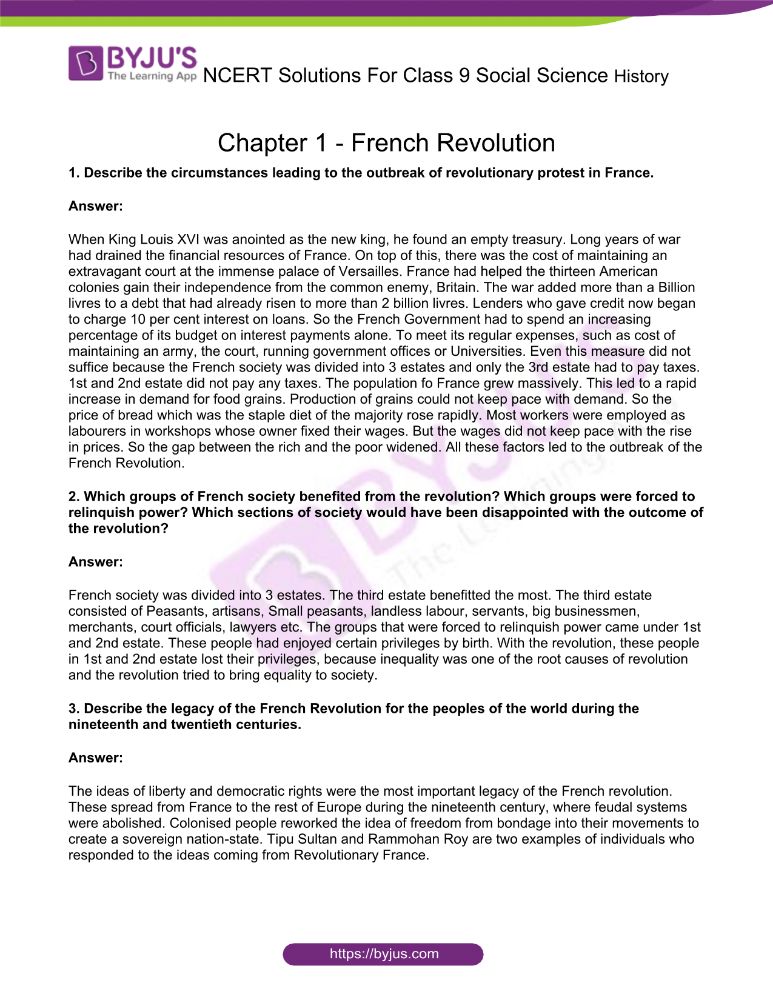 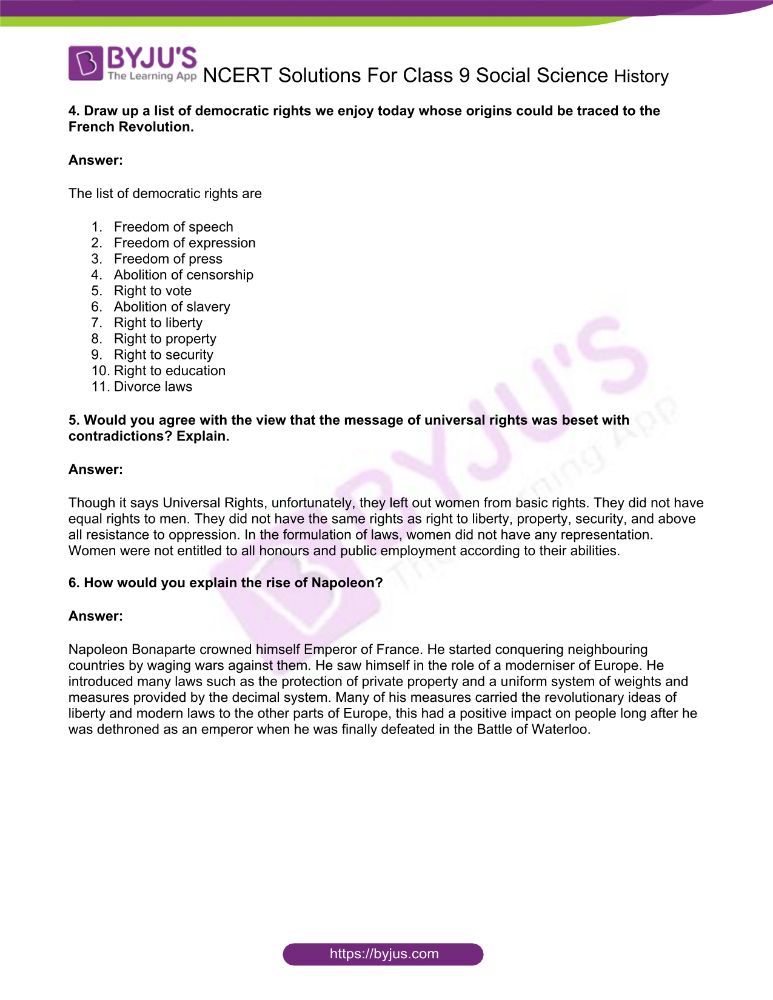 The Solutions for Chapter 1 of India and the Contemporary World are given below. Students should also check NCERT Solutions for Class 9 History for other chapters.

1. Describe the circumstances leading to the outbreak of revolutionary protest in France.

When King Louis XVI was anointed as the new king, he found an empty treasury. Long years of war had drained the financial resources of France. On top of this, there was the cost of maintaining an extravagant court at the Palace of Versailles. France had helped the thirteen American colonies gain their independence from their common enemy, Britain. The war added more than a billion lives to a debt that had already risen to more than 2 billion lives. Lenders who gave credit began to charge 10 per cent interest on loans. So the French Government had to spend an increasing percentage of its budget on interest payments alone. To meet its regular expenses, such as cost of maintaining an army, the court, governmental offices and Universities were increasingly becoming difficult. Raising taxes did not suffice, because the French society was divided into 3 estates and only the 3rd estate had to pay taxes. The 1st estate and the 2nd estate did not pay any taxes. The population of France was also growing massively. This led to a rapid increase in the demand for food grains. Production of grains could not keep pace with demand. So the price of bread, which was the staple diet of the majority rose rapidly. Most workers were employed as labourers in workshops, whose owner fixed their wages. But the wages did not keep pace with the rise in prices. So the gap between the rich and the poor widened. All these factors led to the outbreak of the French Revolution.

French society was divided into 3 estates. The third estate benefitted the most. The third estate consisted of Peasants, artisans, Small peasants, landless labour, servants, big businessmen, merchants, court officials, lawyers etc. The groups that were forced to relinquish power were the people belonging to the 1st and 2nd estate. These people had enjoyed certain privileges by birth. With the revolution, the people in 1st and 2nd estate lost their privileges. Because inequality was one of the root causes of the revolution, the revolution tried to bring equality to society.

3. Describe the legacy of the French Revolution for the peoples of the world during the nineteenth and twentieth centuries.

The ideas of liberty and democratic rights are the most important legacies of the French revolution. These spread from France to the rest of Europe during the nineteenth century, where feudal systems were abolished. Colonised people reworked the idea of freedom from bondage into their movements to create a sovereign nation-state. Tipu Sultan and Ram Mohan Roy are two examples of individuals who responded to the ideas originating from Revolutionary France.

4. Draw up a list of democratic rights we enjoy today whose origins could be traced to the French Revolution.

5. Would you agree with the view that the message of universal rights was beset with contradictions? Explain.

Though it says ‘Universal Rights’, women were unfortunately left out from the basic rights that were promised. They did not have equal rights that men enjoyed. They did not have the right to liberty, property, security and above all, the resistance to oppression. In the formulation of laws, women did not have any representation. Women were not entitled to all the honours and public employment, according to their abilities.

6. How would you explain the rise of Napoleon?

Napoleon Bonaparte crowned himself Emperor of France. He started conquering neighbouring countries by waging wars against them. He saw himself as a moderniser of Europe. He introduced many laws, such as the protection of private property and a uniform system of weights and measures provided by the decimal system. Many of his measures carried the revolutionary ideas of liberty and modern laws to the other parts of Europe. This had a positive impact on people long after he was dethroned as an emperor when he was finally defeated in the Battle of Waterloo.

Chapter 1 of NCERT Social Science History textbook – Indian and the Contemporary World-I is titled as ‘ French Revolution.’ Monarchy of France was ended by the French revolution. A society based on privileges gave way to a new system of governance. Students will read the nature of French society in the mid-19th century.

2. The Outbreak of the Revolution

4. Did Women have a Revolution?

Is the Chapter 1 of NCERT Solutions for Class 9 History important for the CBSE exam?

Yes, Chapter 1 of NCERT Solutions for Class 9 History is equally important as the other chapters for the CBSE exam. So, skipping up on this chapter by students can lead to low marks in the exam. Hence, students should thoroughly practice and revise the key topics of all the chapters regularly to ace the CBSE exam. Referring to these NCERT Solutions aid students to improve their conceptual knowledge and analysing abilities that are vital from the exam point of view.

From Chapter 1 of NCERT Solutions for Class 9 History, what are the topics that students can learn?

From Chapter 1 of NCERT Solutions for Class 9 History, students can learn about topics like –
1. French Society During the Late Eighteenth Century
a) The struggle to survive
b) How a subsistence crisis happens
c) A growing middle class envisages an end to privileges
2. The Outbreak of the Revolution
a) France becomes a constitutional monarchy
3. France Abolishes Monarchy and Becomes a Republic
a) The Reign of Terror
b) A directory rules France
4. Did Women have a Revolution?
a) The Abolition of Slavery
b) The Revolution and Everyday Life

What are the list of democratice laws that originated from the French Revolution as discussed in the NCERT Solutions for Class 9 History Chapter 1?