A group of students took an old shoe box and covered it with a black paper from all sides. They fixed a source of light (a torch) at one end of the box by making a hole in it and made another hole on the other side to view the light. They placed a milk sample contained in a beaker/tumbler in the box as shown in the Fig.2.4. They were amazed to see that milk taken in the tumbler was illuminated. They tried the same activity by taking a salt solution but found that light simply passed through it?
Explain why the milk sample was illuminated. Name the phenomenon involved. 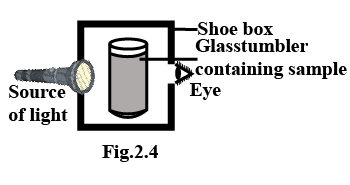