(a) Name the process used to manufacture ammonia from its elements.
(b) Under what conditions do the reactants combine to form ammonia? Give a balanced equation for the reaction.
(c) In what ratio by volume, are the above reactants used.
(d) State one possible source of each reactant used in the process.
(e) What is the function of:
(i) finely divided iron,
(ii) molybdenum in the above process.
(f) Mention two possible ways by which ammonia produced is removed from unchanged gases.

(a) Haber's process is used to manufacture ammonia from its constituting elements.

(b) Nitrogen and hydrogen combine to produce ammonia under the following conditions:
(i) Low temperature: The optimal temperature lies in the range of 450-500oC.
(ii) High pressure: It is around 200-900 atmospheres.
(iii) Catalyst: The catalyst used is finely divided iron or molybdenum.
The balanced equation for the reaction is:
⇌

(c) Nitrogen and hydrogen combine in the ration 1 : 3 by volume to produce ammonia.

(e) Finely divided iron and molybdenum are catalysts that increase the rate of formation of ammonia. They are used as promoters.

(f) The two possible ways by which ammonia produced is removed from unchanged gases:
(i) The mixture of ammonia, nitrogen and hydrogen is cooled in a cooling chamber. Ammonia is easily liquefied as compared to hydrogen and nitrogen, allowing it to be collected in the receiver.
(ii) The unchanged gases, N2 and H2, are pumped back to compression pump, leaving ammonia free to be removed easily.

Suggest Corrections
0
Similar questions
Q. The questions below are related to the manufacture of ammonia.
(i) Name the process.
(ii) In what ratio must the reactants be taken?
(iii) Name the catalyst used.
(iv) Give the equation for the manufacture of ammonia.
(v) Ammonia can act as a reducing agent-write a relevant equation for such a reaction.
Q. (a) Name the process used for the manufacture of nitric acid.
(b) What are the reactants required for it and what are their sources?
(c) In which ratio reactants are taken in this process?
(d) Name the catalyst used in the process.
(e) What is the oxidizing agent in this process?
(f) Write the equations involved.
Q. Figure 10.2 shows the industrial preparation of nitric acid. [5 MARKS] 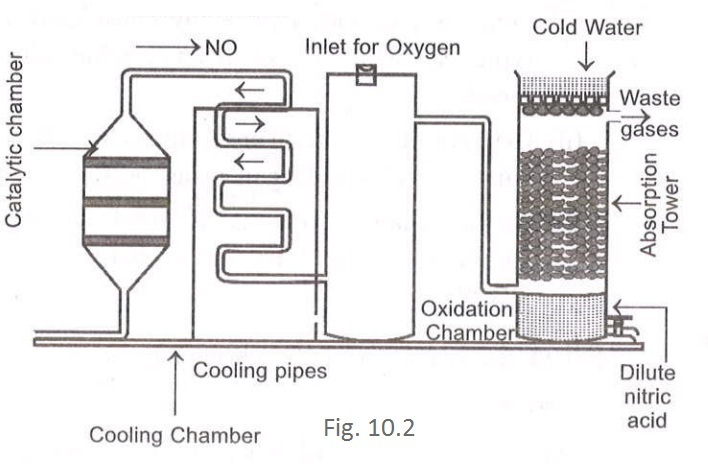 (a) What is the ratio of the reactants taken in the above process?
(b) Name the common name of this process.
(c) Name the catalyst used.
(d) Why should the gases entering the apparatus be pure?
(e) Where do they react? Also, give balanced reactions.
Q. What is the purpose of Haber's process? Name the gaseous inputs in the Haber process and state the ratio by volume in which the gases are mixed. What is done to increase the rate of the reaction in Haber process? Give two different ways by which the product can be separated from the reactants.
Q. Traces of molybdenum are used with finely divided iron which acts as a catalyst during Haber's process for the synthesis of ammonia. Here molybdenum:
View More
Explore more
Introduction to Ammonia
Standard X Chemistry
Solve
Textbooks
Question Papers
Install app