Appu thought that when he washed his woolens in water, there would always be tiny ball like burrs coming out on top of the clothes. He wondered how his new woolen sweaters never had any burrs even though the fleeces were washed in water. He mentioned his suspicion to the farmer.

The farmer said “The burrs do appear on the wool. But, they are removed using a process called ____________________”. He showed some hand cards used for the process. It had tiny teeth that could remove burrs. The farmer added “of course…nowadays this is done using machines …” 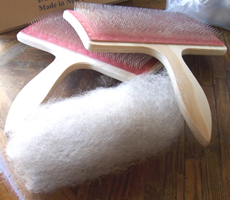 Carding is the process in which burrs are removed from wool. The process also detangles the fibres and also straightens them to some extent. This process was earlier done by hand using hand cards which contained small teeth. Today, this process is almost exclusively done using machines fitted with special rollers that do the carding.