(i) Atrial Systole  The atria contract due to the wave of contraction, stimulated by the SA node. The blood is forced into the ventricles as the bicuspid valves are open.

(ii) Beginning of Ventricular Systole   The contraction of ventricles begin due to the wave of contraction stimulated by AV node. This led to the closing of bicuspid and tricuspid valve producing part of first heart sound, i.e., lub.

(iii) Complete Ventricular Systole   After ventricular contraction, the blood flows into the pulmonary trunk and aorta as the semilunar valves open. 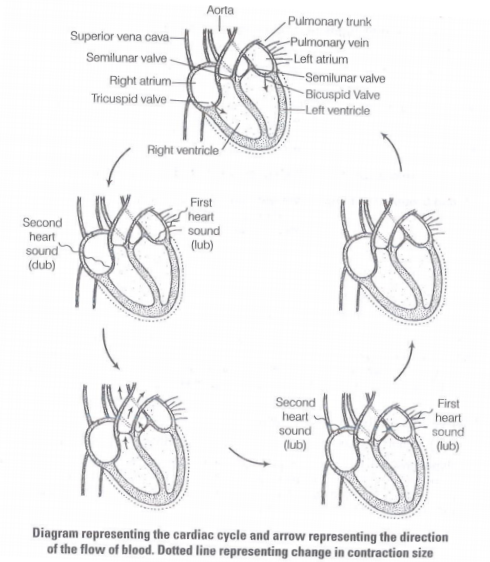 (iv) Beginning of the Ventricular Diastole  The ventricles relax and the semilunar valves are closed. This cause the second heart sound,   i.e., dub.

(v) Complete Ventricular Diastole    The opening of tricuspid and biscuspid valves due to fall in pressure of ventricles and blood flows from the atria into the ventricles. Contraction of the heart does not cause this blood to flow.backward direction, due to the fact that the pressure within the relaxed ventricles is less than that of the atria and veins.

The duration of cardiac cycle last for 0.8 sec.