Explain Rutherford's experiment in brief and give the result.

Rutherford conducted an experiment to explain the arrangement of electrons and protons in an atom.
Rutherford made alpha rays fall incident on a gold foil. He used radioactive element polonium as a source of alpha rays. If the distribution of electrons and protons in an atom is uniform, then all the alpha rays which strike the atoms should reflect back. However, he observed that most of the alpha rays passed through the gold foil in a straight line and few reflected back in different directions.
From his observations, he concluded that;
1. The center of an atom has a very small, heavy and positive electric charge possessing a particle called nucleus.
2. Electrons with negligible weight and negative charge must be arranged around this nucleus.
3. As very less amount of alpha rays reflected back, most part of the atom must be hollow. 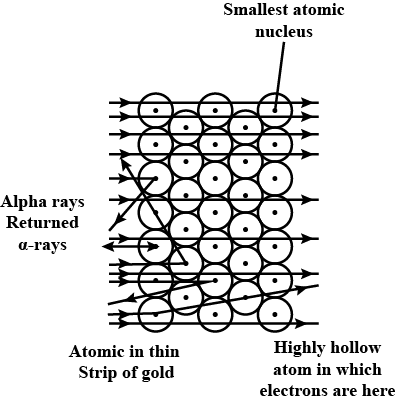