Figure shows a closed loop of wire that consists of a pair of equal semicircles, of radius 3.7 cm, lying in mutually perpendicular planes.The loop was formed by folding a flat circular loop along a diameter until the two halves became perpendicular to each other. A uniform magnetic field $$\overrightarrow {B}$$ of magnitude 76 mT is directed perpendicular to the fold diameter and makes equal angles (of 45°) with the planes of the semicircles. The magnetic field is reduced to zero at a uniform rate during a time interval of 4.5 ms.
During this interval, what are the (a) magnitude and (b) direction (clockwise or counterclockwise when viewed along the direction of $$\overrightarrow {B}$$) of the emf induced in the loop? 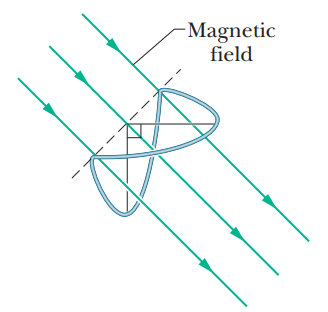