In which of the following diseases, there is destruction of the cartilage?

The correct option is B Rheumatoid arthritis
Immunity refers to the overall ability of the host to fight the pathogens. This is a function of our immune system.

But unfortunately, it has been noticed that sometimes either due to genetic factors or other unknown reasons, the immune system goes haywire and attacks the body's self-cells and destroys them. Self-cells refer to the body’s own cells to which the immune system, under ideal and normal conditions, should not react. This is known as autoimmunity and the diseases that result are known as auto-immune diseases.

Rheumatoid arthritis is an example of auto-immune disease.
Cartilage is a specialised connective tissue found in many parts of the body including the tip of the nose and outer ear. It is also found at the ends of long bones which form joints, where it acts like a cushion and prevents the wear and tear of bones during their movement.

Rheumatoid arthritis is caused due to the presence of a rheumatoid factor (a type of immunoglobulin IgM). It causes the inflammation of the synovial membrane, the plasma membrane of the synovial tissues that are responsible for the production of synovial fluid. Synovial fluid is the lubricating fluid present between joints to prevent the friction between bones during movement. If the inflammation of the synovial membrane is not treated, it causes pain. The membrane then starts secreting abnormal granules which accumulate on the surface of cartilage and start to erode them. 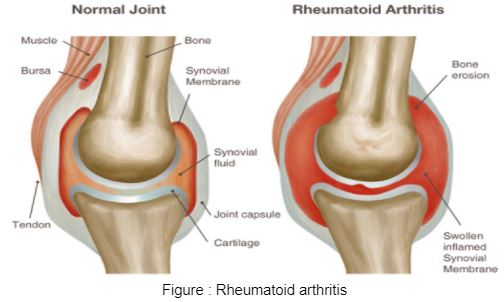 Myasthenia gravis is also an autoimmune disorder. It affects the neuromuscular junction leading to fatigue, weakening and paralysis of skeletal muscle.

Insulin-dependent diabetes mellitus (IDDM) is an autoimmune disorder. In this disorder, the beta cells of the pancreas fail to produce enough insulin. Insulin is a hypoglycemic hormone and plays a major role in decreasing the blood sugar level. Deficiency of insulin results in increased blood sugar level.

Which of the following tissue covers cartilage?