Match the models of atom to their respective parent scientists. 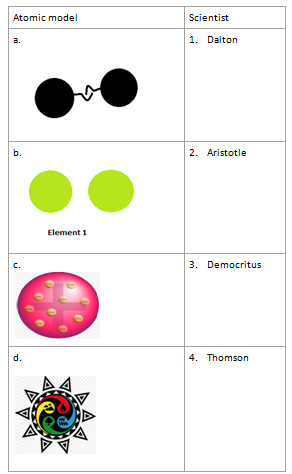 Democritus was the first one to propose that all elements are made of fundamental units which cannot be further divided. He called them "Atomos" .
He claimed that iron Atomos will have hooks as there are strongly bound.

Cheese's Atomos will be squishy as cheese.

Aristotle who was then a great philosopher claimed that everything is made of these four elements (Earth, Fire, Water, Air) in different proportions.

Dalton gave his postulates where he claimed that all elements are made of indestructible and indivisible fundamental units called "Atoms".

Thomson later discovered sub atomic particles , electron and proposed the plum pudding model where he said that the positive charge is evenly distributed like a pudding cake and the electrons are embedded in it like plums in a plum pudding cake (or like seeds in a watermelon)