Q. Consider the following statements about the State legislature in the Indian polity. Which of the above statements is/are correct?

The correct option is A
1 only
Explanation:

The detailed breakdown of the process for passing ordinary bills in the state legislature is given below. Detailed breakdown of the process for passing money bills in the state legislature is given below. 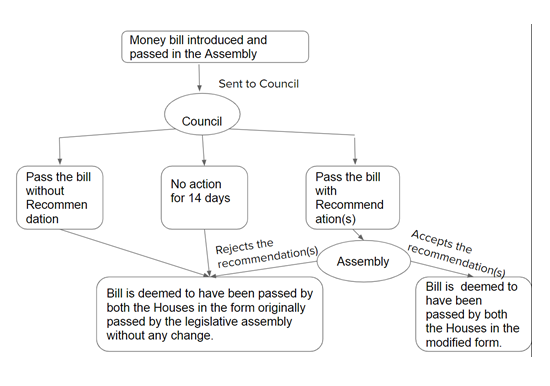 Statement 2 is incorrect:
The Legislative Council in the first instance can delay the passage of a bill for 3 months by taking no action on the bill it had received from the Assembly. After the 3 months, the Assembly can pass the bill again and send it to the council for reconsideration. Now, the council can take no action till 1 month only. After that, the bill is deemed to have been passed by both the houses in the form in which it was passed by the assembly for the second time
Hence, the Legislative Council can delay the passage of an ordinary bill for 4 months.
It is in the case of the money bill that it can delay till 14 days only.
Polity