Show that the diagonals of a square are equal and bisect each other at right angles. 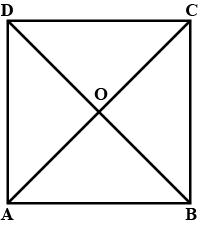