State the main issues in Indian politics in the period after 1989. What different configurations of political parties these differences lead to?

In the last two decades, the Indian political scenario was characterised by unprecedented developments. The period witnessed rampant contestation, change in the party system, rise of new caste identities, politicisation of religion and an undeniable crisis in liberal democracy, leaving a deep impact on the political and socio-economic structure of the country. The following events can be regarded as the main issues after 1989:

a. End of the Congress System: The Congress that enjoyed the hegemonic position during the Nehruvian era received a huge blow after 1989. The Congress Party was defeated in the elections held in 1989.The party that had won as many as 415 seats in the Lok Sabha elections in 1984 was reduced to only 197 seats in this election. The Congress lost the kind of support it enjoyed earlier.
b. Rise of caste-based politics: Although the caste system has been an integral part of India’s social and political system, caste-based identities became more entrenched during this period, which witnessed the rise of the Mandal issue in national politics. The decision by the new National Front government in 1990 to implement the recommendation of the Mandal Commission that jobs in the central government should be reserved for other backward classes led to violent anti-Mandal protests in different parts of the country. This period witnessed the rise of caste-based parties that began to assert their rights and distinct identities, for example, the BSP. Caste became a major issue of vote bank for political parties.
c. Rise of effective opposition: One of the main reasons that accounted for the Congress dominance was the weak opposition. Although the Janata Party in 1977 presented a formidable challenge to the Congress, it had its impact for two years only. By 1989, most of the non-Congress parties had consolidated themselves like the BJP, presenting a strong political alternative to the nation.
d. Rise of regional parties and coalition governments: This period witnessed the growth of regional parties that ensured that the power is not misused by the Centre and that regional interests are promoted. With no single party getting the majority, the period saw the rise of coalition government. The coalition government marked the presence of regional parties at the Centre who shared the power with the national party. A coalition government is a government formed by the alliance of two or more political parties when no single party enjoys the majority support of the members in the legislature. The coalition government ensured that the regional parties were part of the decision-making process impacting the country at large. It also allowed the regional parties to act as game changers in the Indian politics demanding special economic package for their states.
e. Rise of new economic policy (NEP): The year 1991 onwards, the government made far-reaching changes in the economic policies. Barriers on foreign trade and foreign investments were removed to a large extent. The government allowed easy import and export of goods. Foreign companies were permitted to set up factories and industries in the country. Thus, the country focused on liberalisation and privatisation. The NEP brought about major structural economic reforms in the country.
f. Rise of communalism: This period witnessed the worst form of communal violence, which was politically motivated rather than religiously oriented. We may give the example of the demolition of BabriMasjid in Ayodhya, Godhra riots in 2000,Mmuzafarnagar riots of 2013 that raised serious misgivings about the secular status of our country.
g. Assassination of Rajiv Gandhi: The assassination of Rajiv Gandhi in May 1991 by a Sri Lankan Tamil linked to the LTTE on a campaign tour in Tamil Nadu resulted in a political vacuum and the change of leadership in the Congress. Later, we saw the entry of Sonia Gandhi and Rahul Gandhi into politics, bringing Gandhis back to the politics for the Congress-led UPA government in the Centre from 2004 to 2014.
h. Recent event: The last few years have witnessed massive changes in the Indian politics. We saw AAP emerging from the anti-corruption crusade as an important force to reckon with. Although the party did not perform well in the 2014 Lok Sabha elections, it is argued by political commentators that the party divided votes of major national and regional parties.
i. Rise of NAMO: Narendra modi emerged as a Popular face of the BJP and a strong political alternative to the weak political leadership of UPA. Ho changed the face of Gujara, with his developmental mode and encouraged the entire nation to replicate the similar model
j. General elections in India (2014): The 16th Lok Sabha elections are considered the biggest elections in the history, not only in terms of being organsized in the world's largest democray, but also in terms of being fought on issue on personalities and ideologies. The BJP received absolute majority in the 2014 Lok Sabha elections, creating history also in terms of maximum the voter turnout. The results brought about unprecedented victory of the BJP. It swept the polls winning 282 seats; the NDA in total won 336 out of 543 seats. The elections also witnessed the highest voter turnout of 66.38%.

Suggest Corrections
0
Similar questions
Q. In order to form governments, it becomes necessary for political parties to attract people from different sections of society. How did different political parties realize these objectives in the
second phase after independence?
Q. Political parties are different from pressure groups as they only address a specific issue.
Q. Describe the different roles taken up by JACs and political parties in the formation of Telangana state? How do you think JACs created platform across political ideologies?
Q.

What were the main principles of the Hyderabad State Congress, a political party in the princely state of Hyderabad?

Q. The visual representation of the seats won by different political parties is given below: 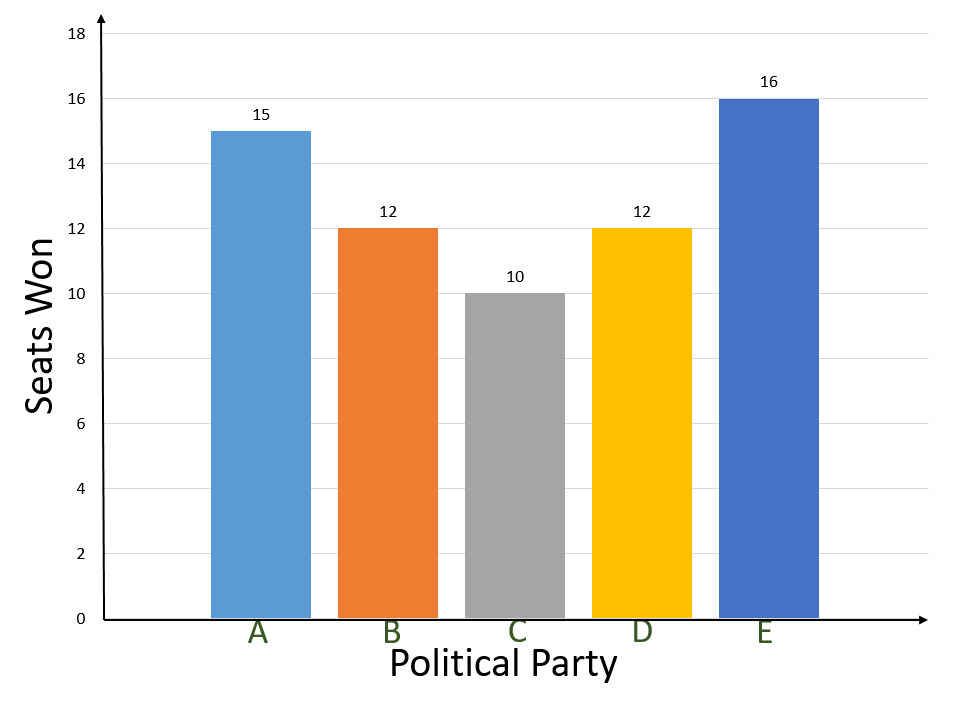 If the number of seats won are given in thousands, then what is the difference between the seats won by political party A and D ?
View More
Explore more
1977 Elections & the End of Emergency
Standard X History
Solve
Textbooks
Question Papers
Install app