Water is formed by the chemical combination of hydrogen and oxygen.
A molecule of water consists of 2 atoms of hydrogen and 1 atom of oxygen, combined chemically. Figure 1 represents the molecules in liquid water (black – oxygen atom; gray – hydrogen atom). Which of the following represents water molecules after liquid water is vaporized on boiling? 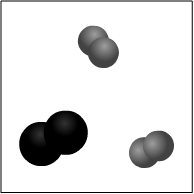 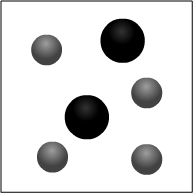 When we boil liquid water, its molecules get separated from each other on vaporization but dissociation of water molecule doesn't take place.
So, H2O will remain in the vapour phase as well.