A light ray enters from medium A to medium B as shown in Figure. The refractive index of medium B relative to A will be (a) greater than unity (b) less than unity (c) equal to unity (d) zero 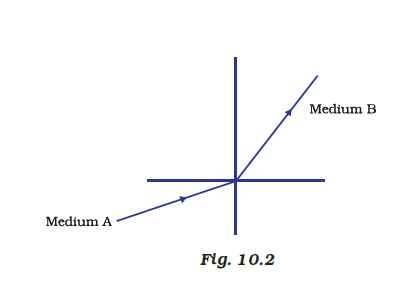 Answer: (a) greater than unity

The bending of a wave when it enters a medium with a different speed is known as refraction. When the light goes from a fast to a slow medium, it refracts, bending the light ray towards the normal to the boundary between the two media. The amount of bending is determined by the refraction indices of the two mediums. The refractive index is a measurement of how much a beam of light bends as it travels from one medium to another.

Because light bends towards the normal in this situation, as it travels from medium A to medium B, medium A is rarer and medium B is denser. The speed of light in a rarer medium (v1) is faster than in a denser medium (v2), i.e. v1>v2.