A salt X is formed and a gas is evolved when ethanoic acid reacts with sodium hydrogen carbonate. Name the salt X and the gas evolved. Describe an activity and draw the diagram of the apparatus to prove that the evolved gas is the one which you have named. Also, write a chemical equation of the reaction involved.

When ethanoic acid reacts with sodium hydrogen carbonate with the production of sodium ethanoate and producing carbon-di-oxide gas.

Set up the experiment as shown in the figure. 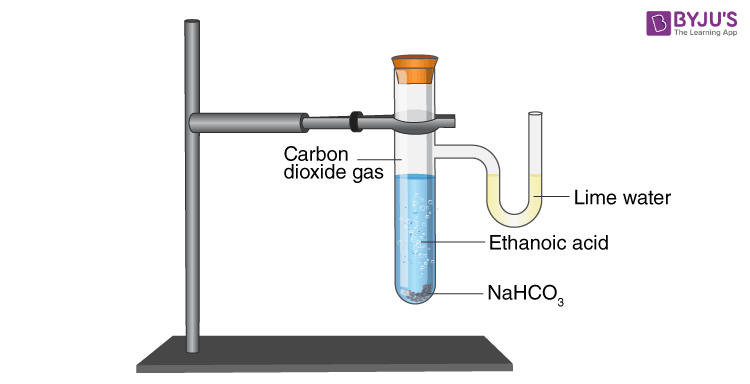 An Electron, In A Hydrogen Atom, In Its Ground State Absorbs 1.5 Times As Much Energy As The Minimum... In periodic table, the basic character of oxides (A) Increases from left to right and decrease from ... In an experiment to study the properties of acetic acid, a student takes about 2 mL of acetic acid i... What are noble gases why are they also called inert gases? Polyphosphates are used as water softening agents because they (A) form soluble complexes with anion... How many valence electrons does al have? The ratio of active masses of 22g of CO2, 3g of H2 and 7g of N2 in a gaseous mixture: (A) 22:3:7 (B)... A depolarizer used in dry cell is (A) ammonium chloride (B) manganese dioxide (C) potassium oxide (D... The Sugar Solution Is A Homogeneous Mixture Whereas Oil And Water Is A Heterogeneous Mixture Justify... What Happens When Agcl Is Doped With Cdcl2 What Is The Name Of This Defect?