A simple pendulum is oscillating between two points A and B as shown in Figure. Is the motion of the bob uniform or non-uniform? 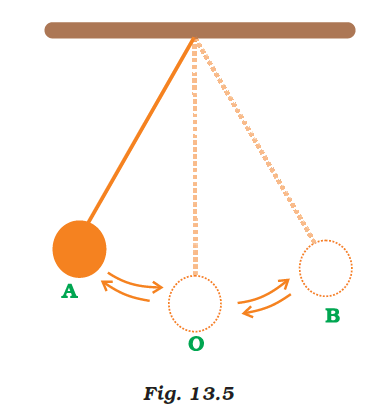 A uniform motion is created by a simple pendulum oscillating between two points A and B. The motion is uniform because Bob moves at a constant speed throughout the motion.

If The Boy Is Standing 1m From The Mirror, Where Will His Image Seem To Be Located? (A) 1m Behind Th... Find The Equation Of The Line In Vector And In Cartesian Form That Passes Through The Point With Pos... Which Of The Following Are Examples Of Celestial Objects? (A) Moon. (B) Planets. (C) Asteroids. (D) ... A Block Of Silver Of Mass 4kg Hanging From A String Is Immersed In A Liquid Of Relative Density 0.72... The Part Of A Transistor Which Is Heavily Doped To Produce A Large Number Of Majority Carries Is:(A)... Assume That A Neutron Breaks Into A Proton And An Electron. What Will Be The Energy Released During ... A Raft Of Wood (Density 600 G/M3) Of Mass 120 Kg Floats In Water. How Much Weight Can Be Put On The ... Which Of The Following Is A First-order Lever? (A) Lemon Squeezer. (B) Opening Or Closing Of A Door.... A Solid Of Density 5000 Kg M3 Weight 0.5 Kgf In Air. It Is Completely Immersed In Water Of Density 1... Three Identical Capacitors C1 C2 And C3 Of Capacitance 6μf Each Are Connected To A 12 V Battery. Fi...