Let AB be the tower. D is the initial and C is the final position of the car respectively.

As man is standing at the top of the tower so, Angles of depression are measured from A.

BC is the distance from the foot of the tower to the car. 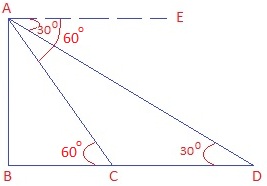 Here, distance of BC is half of CD.

Hence, the time taken is also half.