AB is a current-carrying conductor in the plane of the paper as shown in the figure. What are the directions of magnetic fields produced by it at points P and Q? Given r1 > r2, where will the strength of the magnetic field be larger? 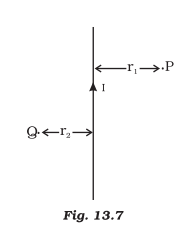