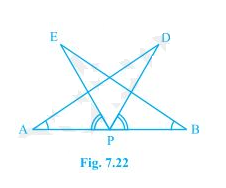 P is the mid-point of line segment AB.

From above three equation both the triangle satisfies “ASA” congruency criterion

(ii) AD and BE are equal as they are corresponding parts of congruent triangles(CPCT).

What is a factor of every number? What does MODEM stands for? By default, a real number is treated as a A) Integer B) Float C) Double D) Long double What is the decimal expansion of pi? There are 2 bags a and b. Bag a contains 6 red flowers and 3 pink flowers whereas bag b contains 2 r... What is the range of the first 10 prime numbers? Calculate the compound interest on Rs.200 for 1.5 years at 10% per annum compounded semiannually. Find the LCM of 40, 36 and 126 using prime factorization. Write five three digit numbers that are multiples of 2. Riya sold her car for Rs. 50, 000 less than what she bought for and lost 8%. At what price should sh...