ΔABC and ΔDBC are two isosceles triangles on the same base BC and vertices A and D are on the same side of BC (see Fig.) . If AD is extended to intersect BC at P, show that (i) ΔABD ΔACD (ii) ΔABP ΔACP (iii) AP bisects A as well as D. (iv) AP is the perpendicular bisector of BC. 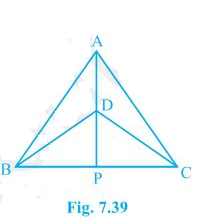 Given: ∆ABC and ∆DCB are isosceles ∆on the same base BC.

From above equations, AP bisects ∠ A as well as ∠ D

∴AP is ⊥ bisects of BC.