Boojho made the circuit given in Fig. and observed that the bulb did not glow. On Paheli’s suggestion, he added one more cell in the circuit. The bulb now glows. Explain. 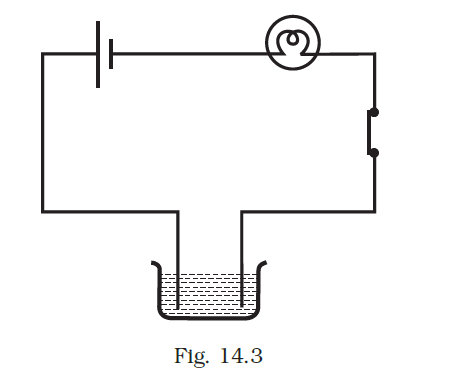 The bulb did not initially glow because one of the cells could not produce enough voltage to cause the current to glow the bulb. When a second cell is connected to the circuit, the voltage across the circuit doubles, allowing the current to be increased. The filament of the bulb is sufficiently heated by this current, and the bulb glows.

The relationship between frequency (f) and time period (T) is given by The motion of the earth around the sun is known as A solar cell converts solar energy into The potential energy of a particle varies with distance x from a fixed origin as U = (A√x)/( x... What is the SI unit of wave number? Is energy a vector quantity? Cryogenic engines find applications in The position x of a particle varies with time as x = at2-bt3. The acceleration... A motorcyclist drives from A to B with a uniform speed of 30 km/h and returns with a speed of 20 km/... A heavy uniform chain lies on a horizontal tabletop. If the coefficient of friction between the chai...