Draw a labelled diagram of the longitudinal section of a flower.

Flowers are the reproductive part of a plant. They are not only involved in reproduction but are also a source of food for other living organisms. They are a rich source of nectar.

The different part of a flower is labelled below. 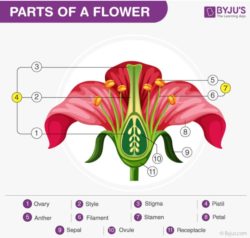 How does the chick recognise her own mother? Which of the following is not fixed capital? (a) Agricultural Land (b) Tube Well C) Fertilisers and ... What is circinate ptyxis and furcate venation in fern? Which is the Queen and King of Flowers? What are scientific names of dog, cat, buffalo, fox, cow and ox? What is the minimum and maximum body temperature? What is stock and scion in grafting? What is embryonal axis? What is the full form of 1) DPT 2) DDT 3) BCG? How does the bee know which flower has nectar?