Boric acid is a monobasic Lewis acid of boron with a chemical formula H3BO3. It is an acid-containing four atoms of oxygen, one atom of boron, and three atoms of hydrogen. It is also called as acidum boricum, hydrogen borate, boracic acid, and orthoboric acid.

Boric acid is formed in layers. The Planar BO 3 group is connected by H atoms to another unit. The H atoms form a covalent bond with the BO 3 group and a hydrogen bond with another BO 3 unit. 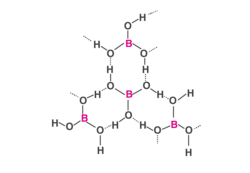