Explain the working of Ruby Laser with the help of energy level diagram. 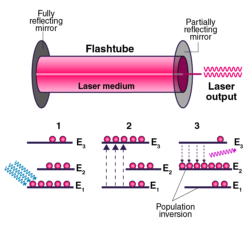 Within a ruby laser, a single ruby crystal (Al2O3: Cr3+) serves as a laser media or active medium in the shape of a cylinder. The laser medium in the ruby laser consists of the sapphire host (Al2O3), which is doped with small quantities of chromium ions (Cr3+). The ruby possesses good thermal properties.

The ends of the cylindrical ruby rod are flat and parallel. The cylindrical ruby rod is positioned between two mirrors. Both mirrors are coated with the optical coating. The method of depositing thin layers of metals on glass substrates to create mirror surfaces is known as silvering. Both the mirror is silvered or coated in a different way.

After a certain time, by releasing energy in the form of photons, the electrons in metastable state E2 fall into the lower energy state E1. This is known as spontaneous radiation emission. When the emitted photon interacts with the electron in the metastable state, it forcefully causes that electron to fall into E1 state. As a consequence, it emits two photons. It is called stimulated radiation emission and since the reaction is continuous, millions of photons are produced.

A mechanism called spontaneous emission creates light in an active medium. The light produced inside the laser medium will bounce between the two mirrors. By releasing light energy this causes other electrons to fall into the ground state. It is called stimulated emission. Similarly, it causes millions of electrons to emit light. And the light gain is attained.