How will you separate oil and water from their mixture? 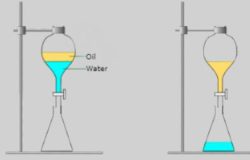 Two immiscible liquids, oil and water, can be separated by using Separating Funnel. The mixture of oil and water forms two separate layers because they are completely insoluble in each other. Oil forms the upper layer while water forms lower. In separating funnel they are kept for resting, when two layers become stable by using separating funnel they are filtered one by one. The process involves using the mixtures of unequal particle density. The mechanism involves taking advantage of the unequal density of the particles in the mixture. Because water is denser than oil, it can be separated by means of the funnel and left in the funnel with an oil layer.