Metalloids are a small group of elements founds in the periodic table of elements along the zigzag line that distinguishes metals from non-metals and is drawn from between boron and aluminium to the border polonium and astatine. 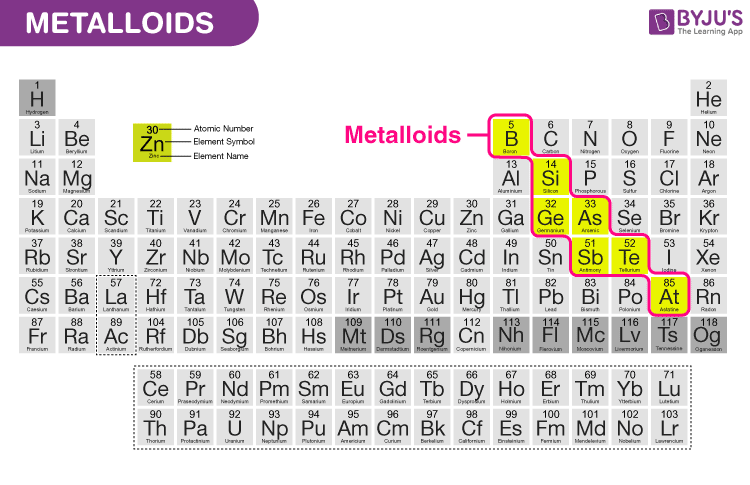 Which Elements Are Metalloids?

Following are the elements that are considered to be metalloids:

These seven elements were classified as metalloids in the periodic table from the 13th to the 16th group.

It was supposed to classify Astatine as either a non-metal or metalloid. The formation of metals has also been expected.

Polonium has no use as it is the rarest element and is highly radioactive and toxic in nature.

Freon group of refrigerants are A) Inflammable B) Toxic C) Non-inflammable and toxic D) Nontoxic and... What is the scientific name of baking soda? Name a non-metal which is a good conductor of electricity Why does sodium keep immersed in kerosene oil? Difference between coprecipitation and post precipitation Name the ash formed on burning of magnesium ribbon Why is the dipole moment of CH4 zero? In an S N1 reaction of alkyl halide on chiral centres there is _______ Which of the following does not form an acidic salt? (a) Phosphoric acid (b) Carbonic acid (c) Hydro... Name the softest metal Which of the following is most elastic? a) Steel b) Rubber c) Glass d) Sponge Give two important uses of washing soda and baking soda. What is the formula of rectified spirit? Define the term brisk effervescence? The coefficient of thermal conductivity depends upon? How glycerol reach with oxalic acid? What is the density of spirit in kg /m3? What is the colour of zinc metal? Name two natural sources of oxalic acid. How many metals nonmetals and metalloids are there on the periodic table?