What Is Electrolysis Of Water? - Chemistry Question

The electrolysis is defined as the process by which ionic substances are decomposed into simpler substances when an electric current is passed through them.

Following is the equation of electrolysis of water:

Half reactions in the electrolysis of pure water at pH=7, and at 25°Care

The net reaction of electrolysis of water is given as; 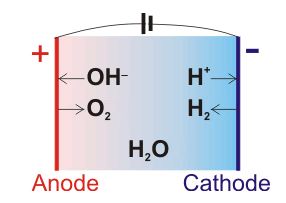