What is the basic structure of the atom?

From basic chemistry, we know that an atom consists of a nucleus that is surrounded by electrons and that the nucleus itself is composed of protons and neutrons. The electrons are negatively charged and protons are positively charged while the neutrons are electrically neutral. 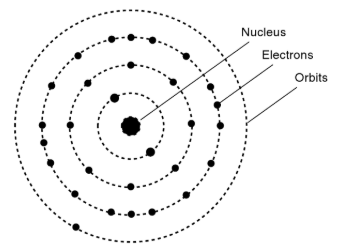 In a simplified description of the atomic structure based on the Bohr model, the electrons are considered to move in circular orbits of specific radii corresponding to discrete energy states with the nucleus as the center. The atom may then be viewed as consisting of circular shells of electrons where the lowest shell corresponds to the lowest energy state with the energy of the higher level shells or energy states being integral multiples of the lowest state.