Write short notes on the cyclic forms of ketose monosaccharides.

Like aldoses, ketoses also exist in a cyclic structure. But, ketoses has their keto group in the second Carbon. Rotation of the fifth carbon, in fructose chain, brings the C5-hydroxyl group and the C2 keto groups nearer to form hemiacetal containing a five-membered ring.

It is an important ketohexose. The molecular formula of fructose is C6H12O6 and contains a ketonic functional group at carbon number 2 and has six carbon atoms in a straight chain. The ring member of fructose is in analogy to the compound Furan and is named furanose. The cyclic structure of fructose is exhibited below: 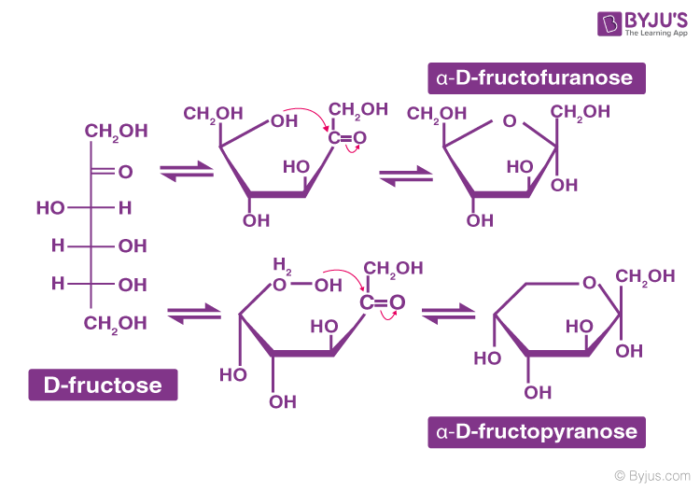 Name a non-metal which is a good conductor of electricity Why does sodium keep immersed in kerosene oil? Difference between coprecipitation and post precipitation Freon group of refrigerants are A) Inflammable B) Toxic C) Non-inflammable and toxic D) Nontoxic and... What is the scientific name of baking soda? Name the softest metal Which of the following is most elastic? a) Steel b) Rubber c) Glass d) Sponge Give two important uses of washing soda and baking soda. What is the formula of rectified spirit? Define the term brisk effervescence? Name the ash formed on burning of magnesium ribbon Why is the dipole moment of CH4 zero? In an S N1 reaction of alkyl halide on chiral centres there is _______ Which of the following does not form an acidic salt? (a) Phosphoric acid (b) Carbonic acid (c) Hydro... Name two natural sources of oxalic acid. How many metals nonmetals and metalloids are there on the periodic table? What is a philosopher’s wool? What happens when Sulphur dioxide is dissolved in water? What is the bond order of CO2? Write any monomer used in terylene?