Q.1.Which of the following diseases is called sex-linked diseases?

Q.2. Which of the following diseases is caused by the numerical changes in autosomes?

(a) All children are colourblind

(c) Girls are the carrier but boys are normal

(d) Normal vision in all children and no carrier

Sol: (c) Girls are the carrier but boys are normal.

(a) All haemophilic sons

(b) All haemophilic daughter

(c) Half normal sons and half haemophilic sons

(d) Half normal daughters and half haemophilic daughters

Sol: (c) Half normal sons and half haemophilic sons.

Q.7. What happens when the linkage is found in a group of genes?

(c) Do not show chromosomal mapping

(d) Show recombination during the meiosis

Q.8. In which of the following the hereditary recombination is found in the higher animals as the result of crossing over?

(a) Between the two daughter nuclei

(b) Between the two different bivalents

(c) Between the sister chromatids of any bivalent

(d) Between the non-sister chromatids of any bivalent

Sol: (d) Between the non-sister chromatids of any bivalent.

Q.9. Which of the following enzymes cannot be synthesized in phenylketonuria diseases?

(a) Polyploidy of sex chromosome

(b) Aneuploidy of sex chromosome

(c) Mutation of the autosomal gene

Q.1.When and which type of cell division crossing over occurs?

Sol: Meiosis is the type of cell division, which occurs during the Pachytene phase of Meiosis-1.

Q.2.Which type of mutation occurs in the haemoglobin of the sickle cell anaemia?

Sol: Point mutation: At the sixth position of the B chain of the haemoglobin glutamic acid is replaced by valine amino acid.

Q.3. What is Down syndrome?

Q.4. What is the function of Phenylalanine hydroxylase?

Sol: This enzyme catabolizes phenylalanine into the tyrosine.

Q.5. How many chromosomes are present in Klinefelter’s syndrome?

Sol: A person suffering from the Klinefelter’s syndrome has 47 or 48 or 49 chromosomes in their cells.

Sol: The group of genes found on one chromosome, which has a tendency to be inherited together is called the linkage group.

Q.7. What do you mean by haemophilia?

Sol: Haemophilia is a sex-linked hereditary disease. There is a delay or no blood clottings. Its recessive defective gene is found on the X-chromosome.

Q.8. What is a number of chromosomes found in a man and woman?

Q.9. What is aneuploidy?

Sol: The condition in which there is a loss or gain of chromosomes due to abnormal segregation of genes during cell division is called aneuploidy.

Sol: The condition in which the count of the entire set of chromosomes increases due to the failure of cytokinesis in cell division is called the polyploidy. It is mostly observed in plants.

Q.11. What are the examples of chromosomal abnormalities?

Sol: The examples of chromosomal abnormalities are :

Q.12. What are chromosomes?

Sol: Chromosomes are thread-like structures present in the nucleus, which plays an important role in carrying the hereditary information in the form of genes, which is passed from parents to offspring.

Sol: This is a type of sex-linked recessive disorders. According to the genetic inheritance pattern, the unaffected carrier mother passes on the haemophilic genes to sons. Haemophilia is a very rare type of disease among females because for a female to get the disease, the mother should either be hemophilic or a carrier but the father should be haemophilic.

Haemophilia is a disorder in which blood doesn’t clot normally as the protein which helps in clotting of blood is affected. Therefore, a person suffering from this disease usually has symptoms of unexplained and excessive bleeding from cuts or injuries. This type of genetic disorder is caused when the affected gene is located on the X chromosomes. Therefore, males are more frequently affected.

Sol: The Down syndrome is a type of trisomy as there is an extra copy of chromosome 21. It is named so after the person who discovered this chromosomal disorder – Langdon Down.

The symptoms in a person include the following:

Q.15. What is Sickle-cell anaemia?

Sol: This is a type of autosomal recessive genetic disorder. Its inheritance pattern follows inheritance from two carrying parents.

This reduces the oxygen-binding capacity of the haemoglobin molecule.

Q.16. What is Phenylketonuria?

Sol: This is a type of autosomal recessive genetic disorder. Phenylketonuria is an inborn error caused due to the decreased metabolism level of the amino acid phenylalanine. In this disorder, the affected person does not have the enzyme to convert phenylalanine to tyrosine. As a result, phenylalanine accumulation takes place in the body and is converted into many derivatives which result in intellectual disability or mental retardation.

Q.17. What are chromosomal abnormalities?

Sol: Every species has a characteristic structure and number of chromosomes. The slightest alteration in the chromosomes can lead to various abnormalities. The chromosomal abnormalities are a type of genetic disorders that are seen in an individual when there is a :

Sol: Klinefelter syndrome is one of the genetic disorders in males. It occurs when a male baby is born with more than required or extra X chromosomes. A person suffering from this disease is always a man.

Men with Klinefelter may have:

There are no obvious symptoms in men with Klinefelter syndrome. Some of the most common symptoms of Klinefelter Syndrome are:

A person suffering from this disease is always a woman. Such a woman has only one X chromosome instead of two and hence a total number of chromosomes found are only 45 (44 + 0). It is called Turner’s Syndrome. This is a rare disorder, which occurs in 1 out of every 3,000 live births.

The symptoms of Turner’s Syndrome include:

Q.20. Explain the changes in chromosomal numbers in a Klinefelter Syndrome with a diagram.

Sol: Klinefelter Syndrome is mainly seen in males. Their cells may have 47, 48 or 49 chromosomes rather than 46. This additional number may be of X or Y chromosomes. Klinefelter males may have the following type of chromosomes: 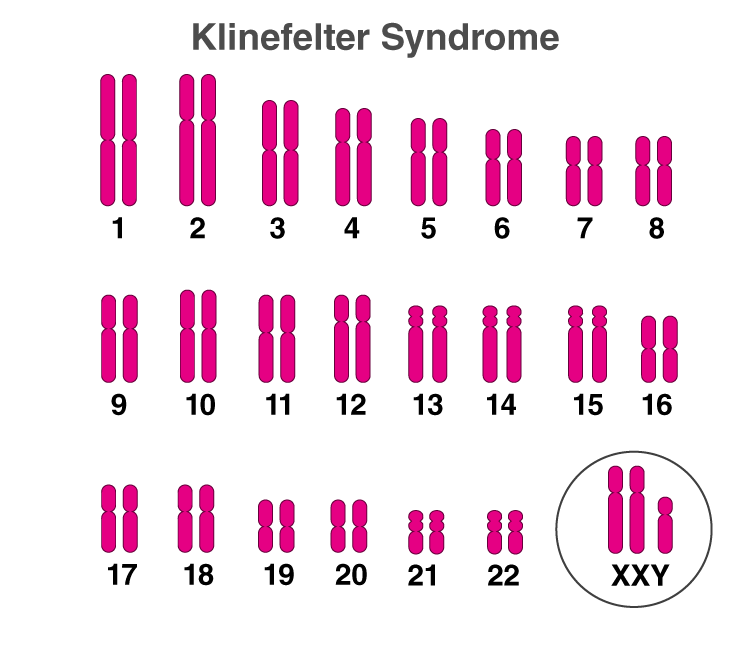 Q.21. What is colour blindness?

It is a hereditary disease. In this disease, the person is unable to differentiate different colours.

Women may be carriers of this disease or they may suffer from this disease. This is mainly because two x-chromosomes are found in a woman.

Q.22. What are sex-linked character and their inheritance?

The human females have XX chromosomes and the human male has XY chromosome along with 44 autosomes in both the sexes.

to his daughters only.

Some of the sex-linked hereditary diseases found in human beings are as follows:

Q.23. Explain the types of linkage?

Sol: Linkage is of two types:

When certain genes are located so nearly on the same chromosomes and tend to remain linked together while passing from one generation to another without any new combination are termed as the complete linkage.

Linked genes are not inherited always in their combination. In the homologous chromosomes or at the time of meiosis, the exchange of such genes may be found due to the crossing over. The genes located at the distance on the chromosomes are also incompletely linked because of the more chances of isolation by the crossing over.

We, at BYJU’S, aim to deliver students with all the necessary support and allow them to prove their abilities by excelling in their examination. Important Questions for RBSE Class 12 Biology Chapter-36, Chromosomal Aberration in Humans are prepared under the guidance of RBSE syllabus for Class 12 with proper structure and after thorough research on the particular topics.