RS Aggarwal Solutions for Class 8 Maths Chapter 23- Line Graphs and Linear Graphs, are provided here. Our expert faculty team has prepared solutions in order to help you with your exam preparation to acquire good marks in Maths. If you wish to secure an excellent score, solving RS Aggarwal Class 8 Solutions is an utmost necessity. These solutions will help you in gaining knowledge and strong command over the subject. Practising the textbook questions will help you in analyzing your level of preparation and knowledge of the concept.

In order to help you understand and solve the problems, we at BYJU’S have designed these solutions in a very lucid and clear manner that helps students solve problems in the most efficient possible ways. Here RS Aggarwal Solutions for Class 8 Chapter 23 contains answers which are solved in detail. Download pdf of Class 8 Chapter 23 in their respective links. 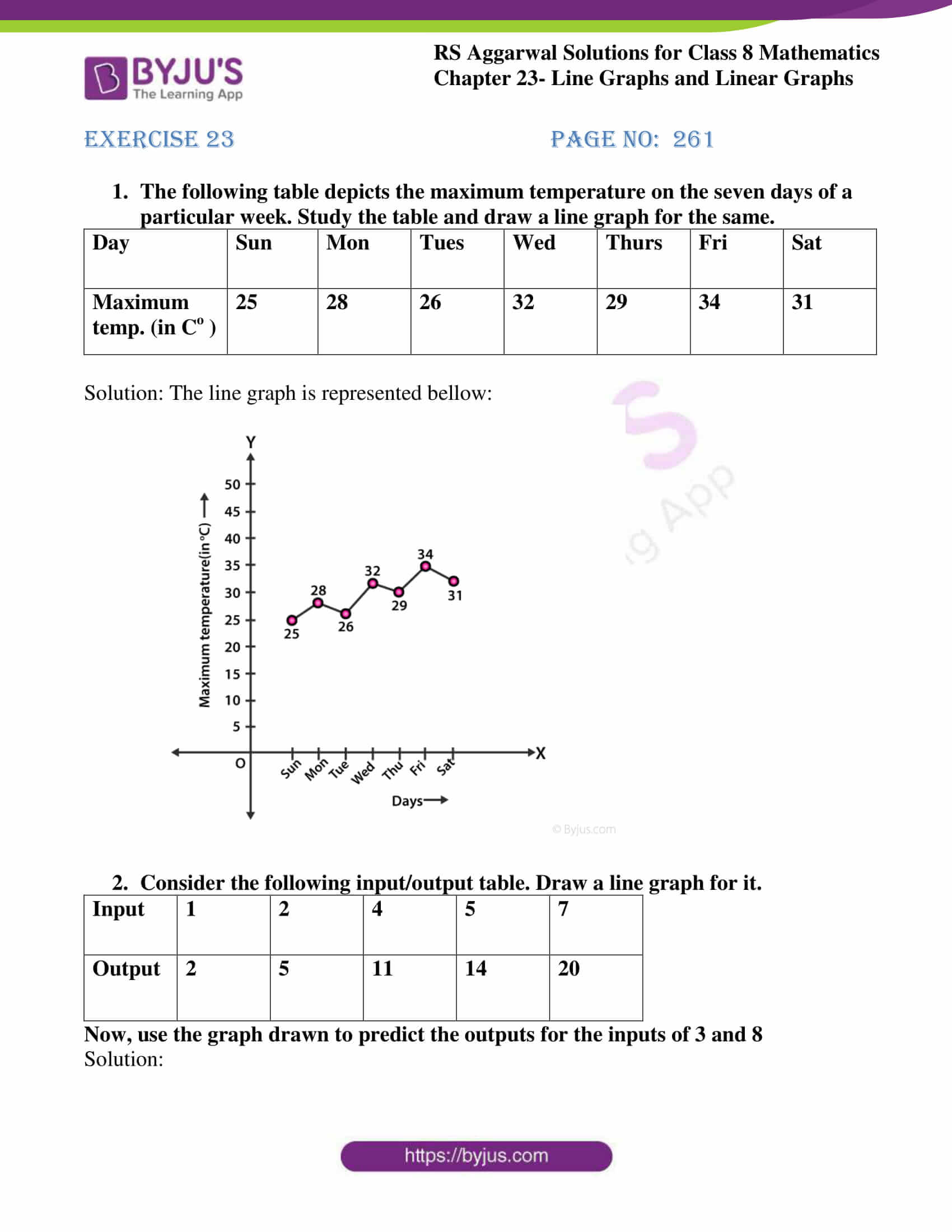 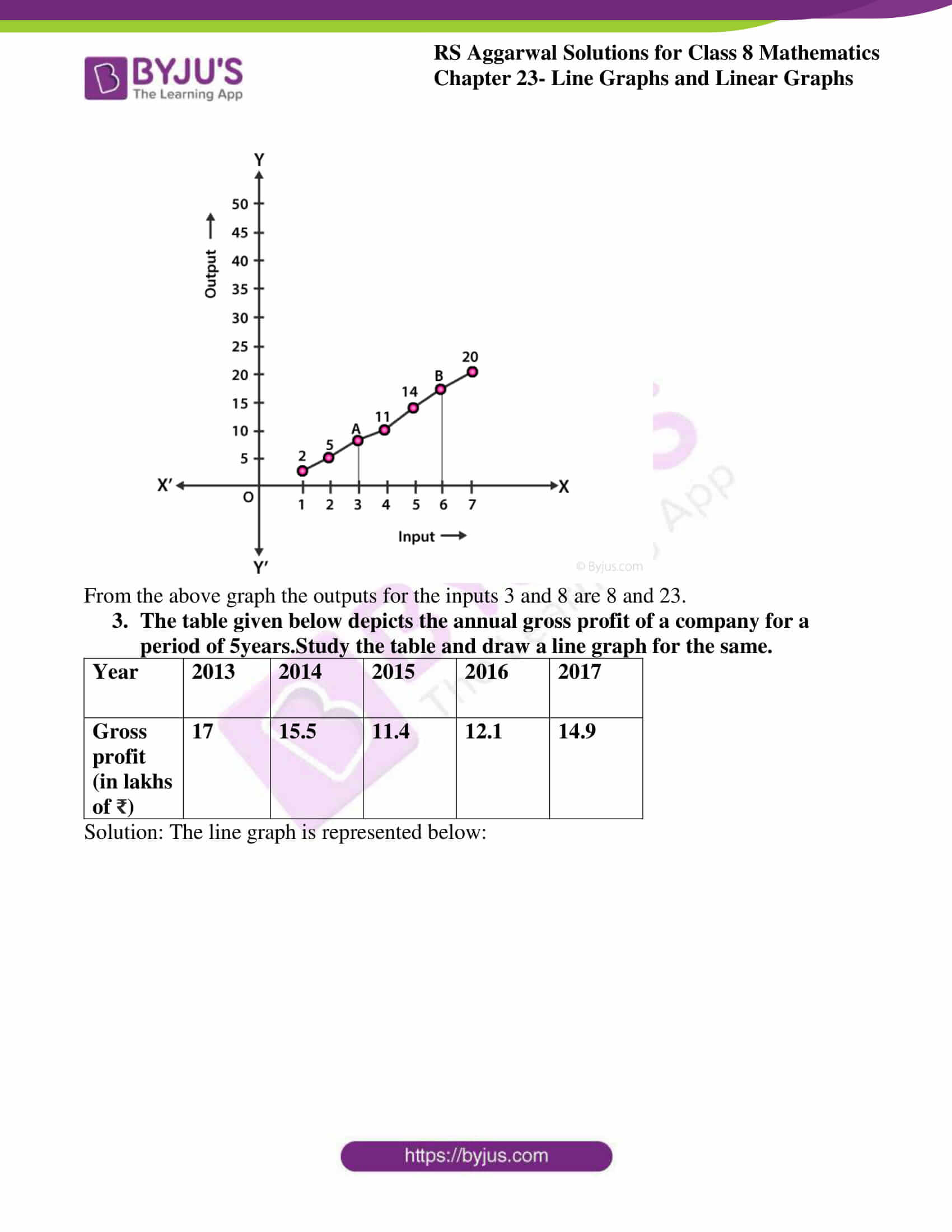 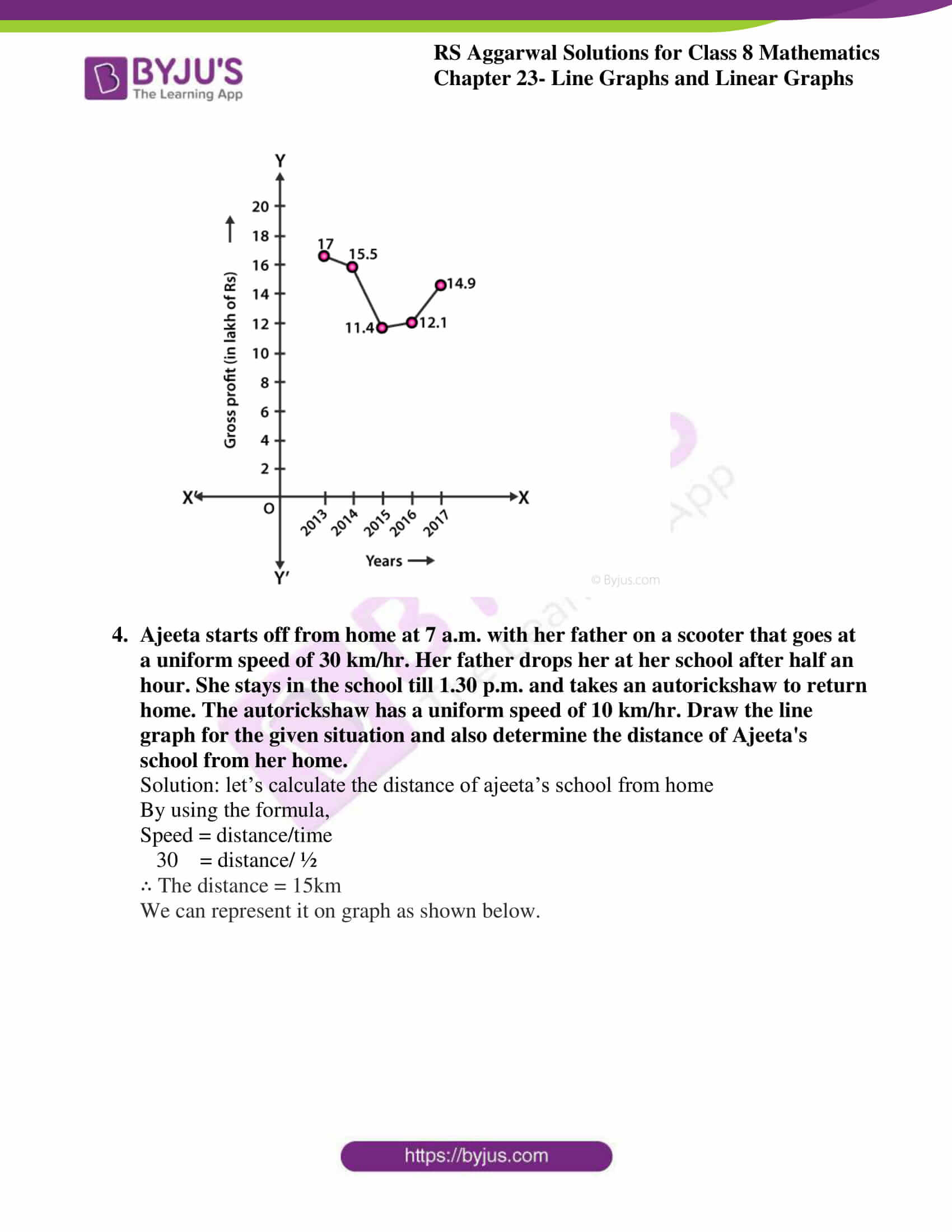 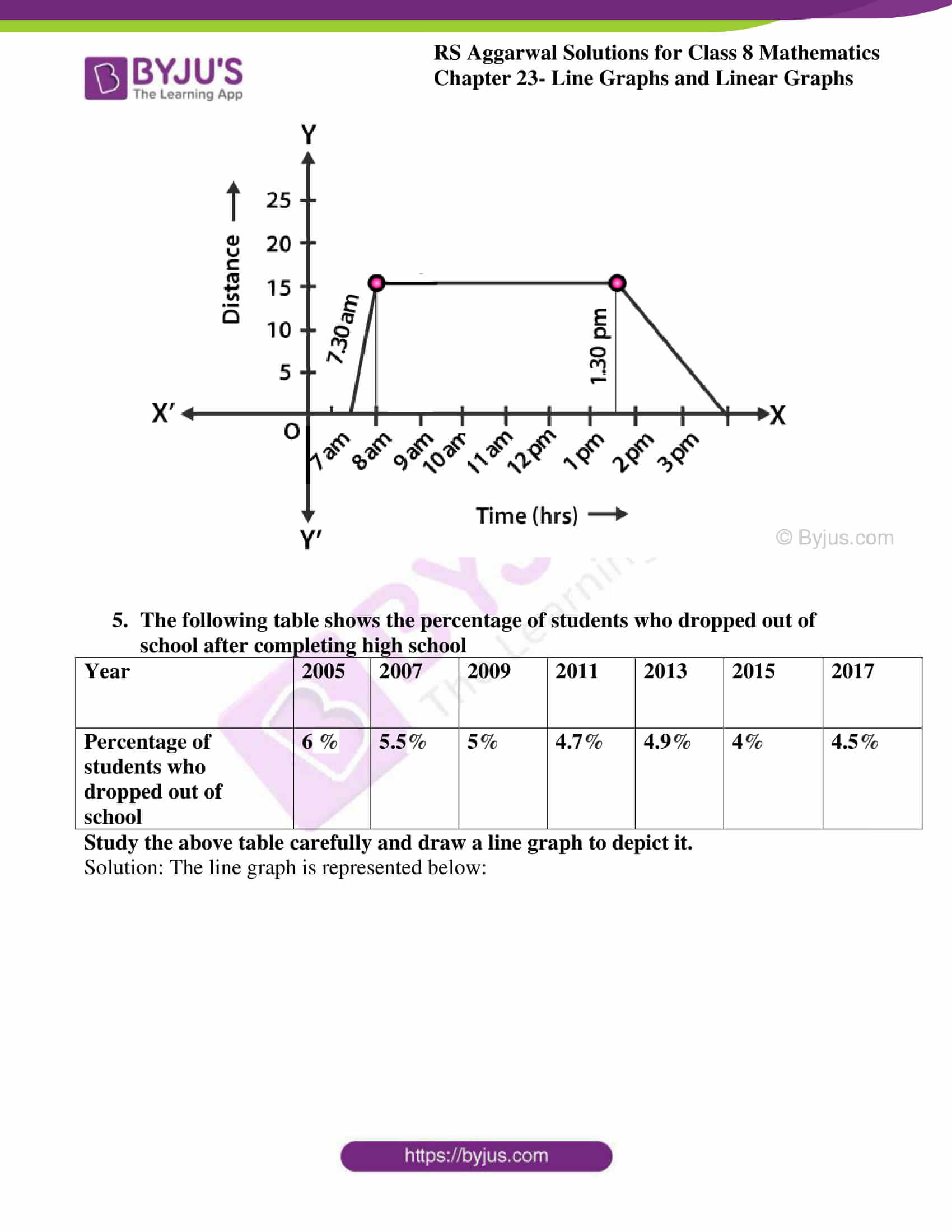 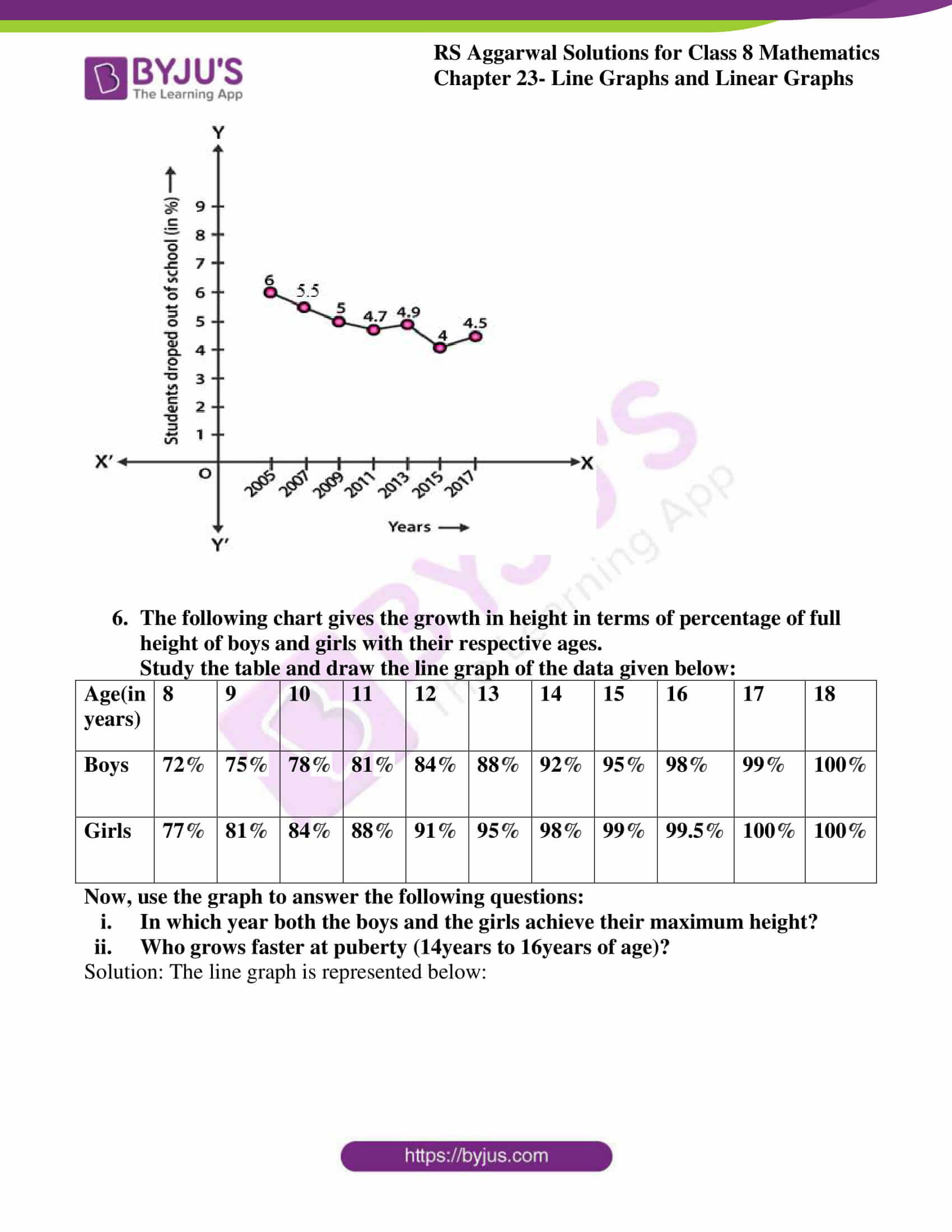 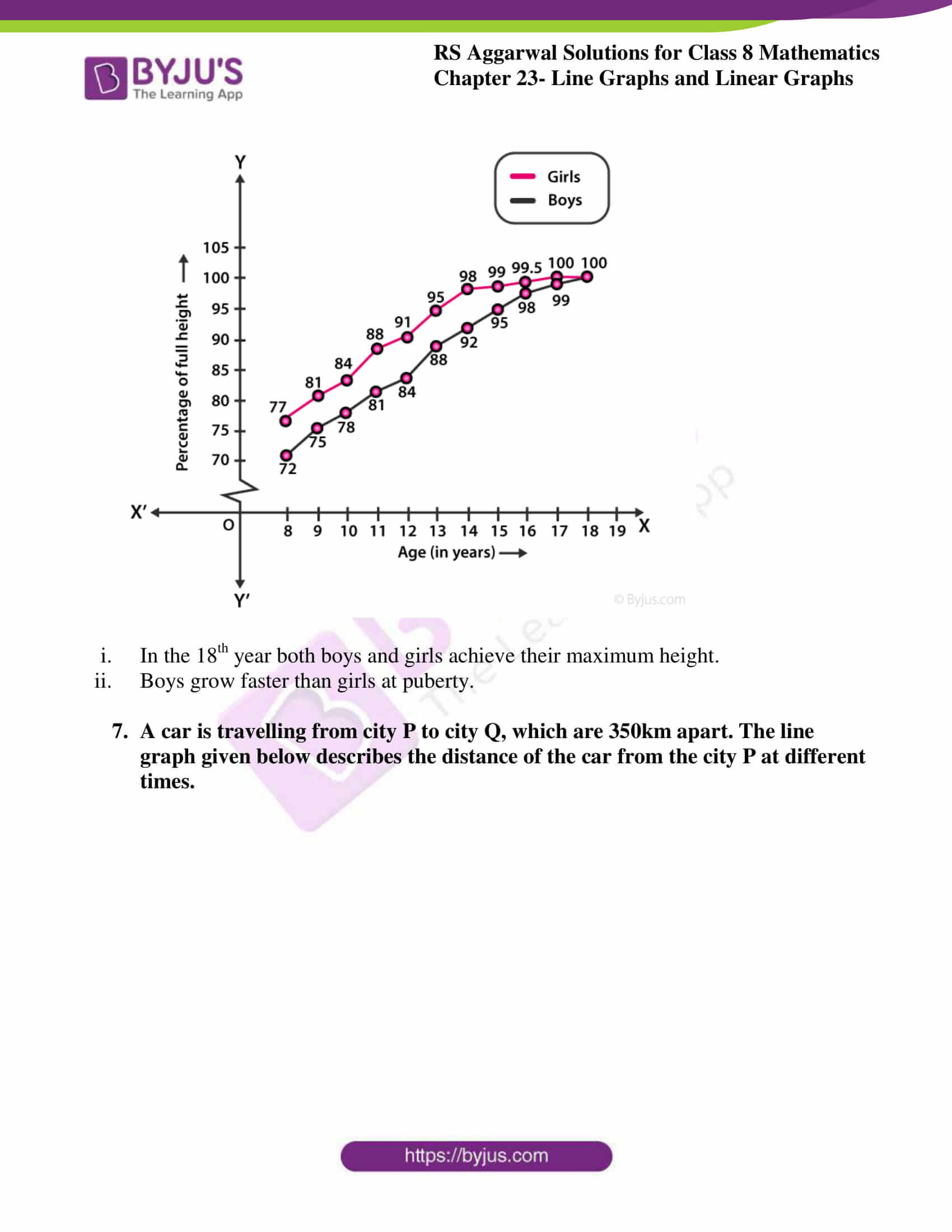 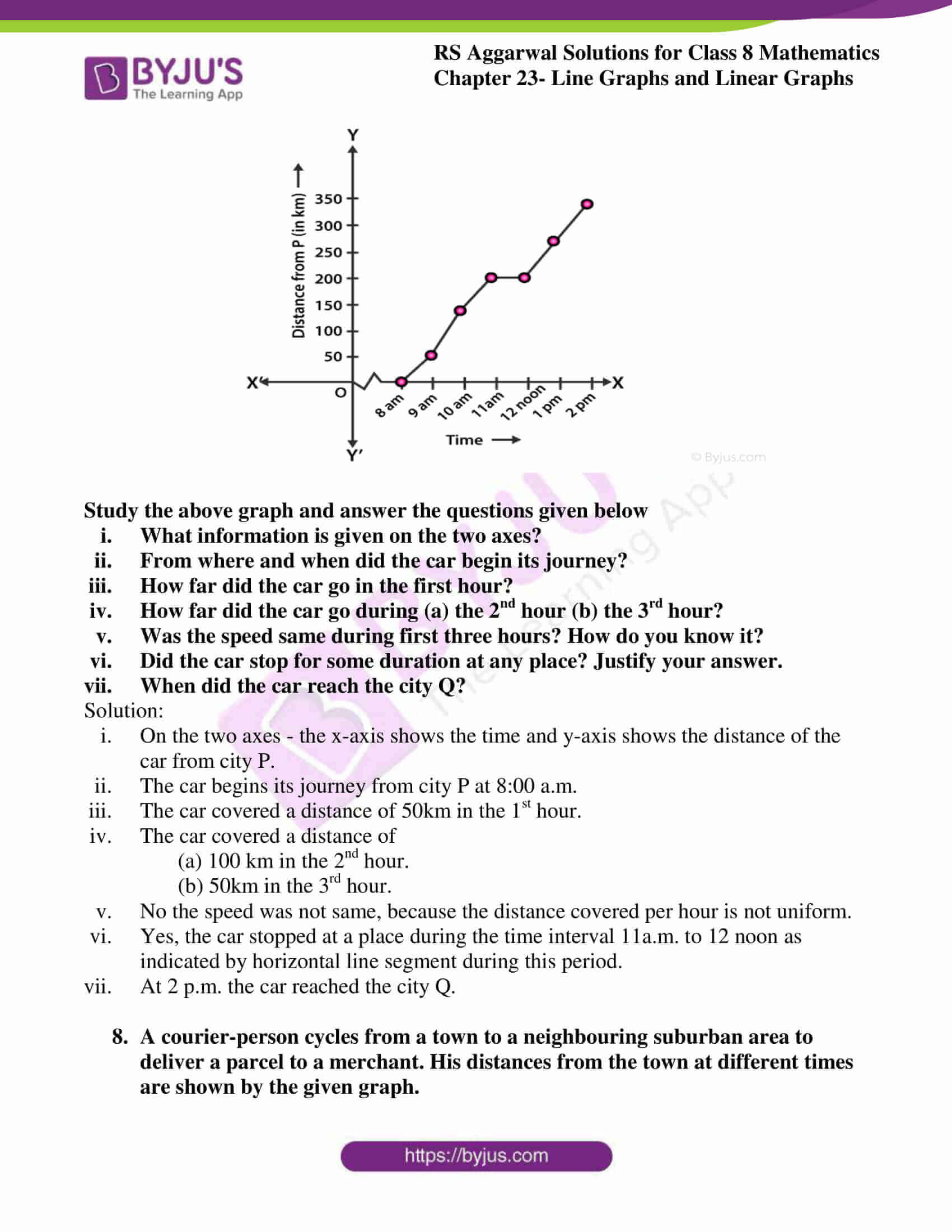 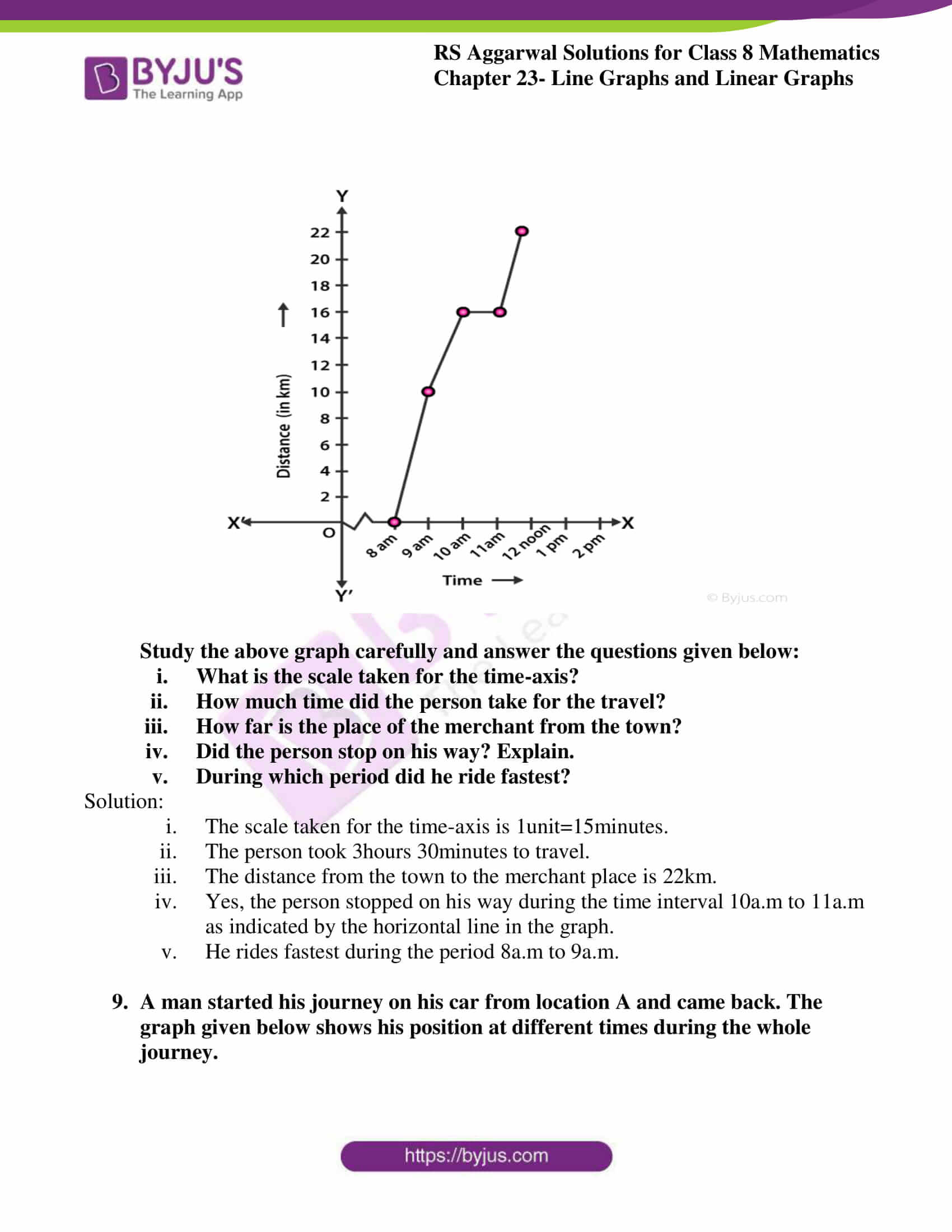 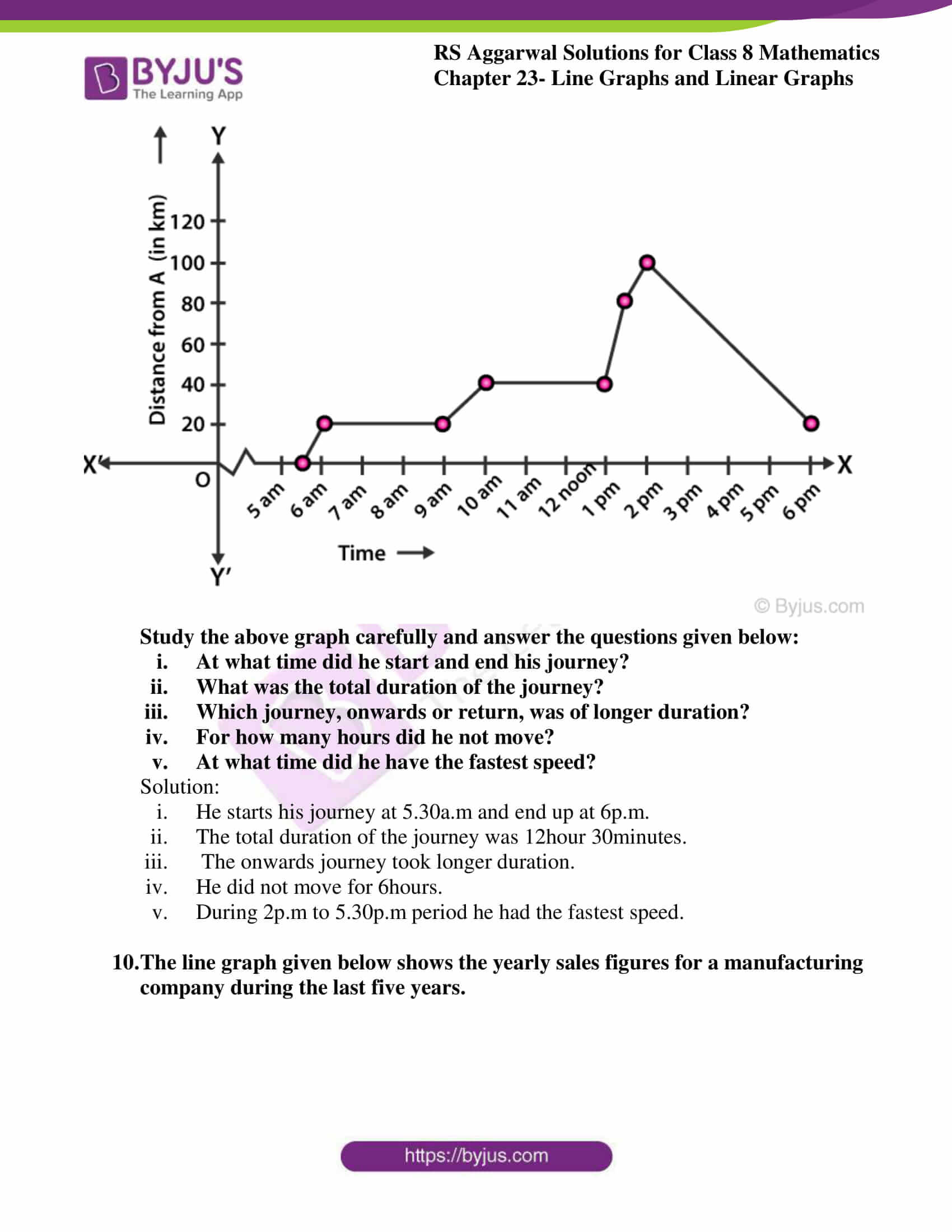 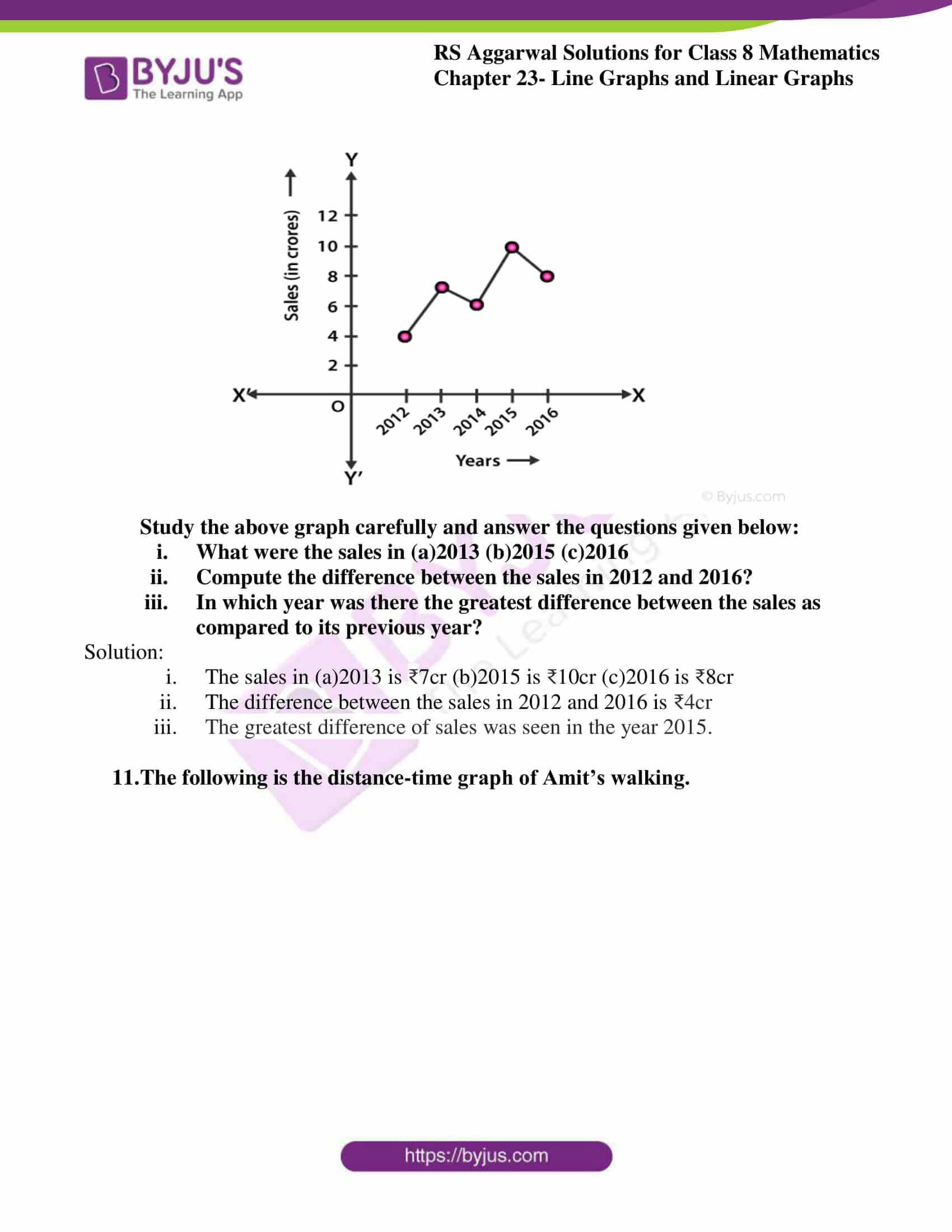 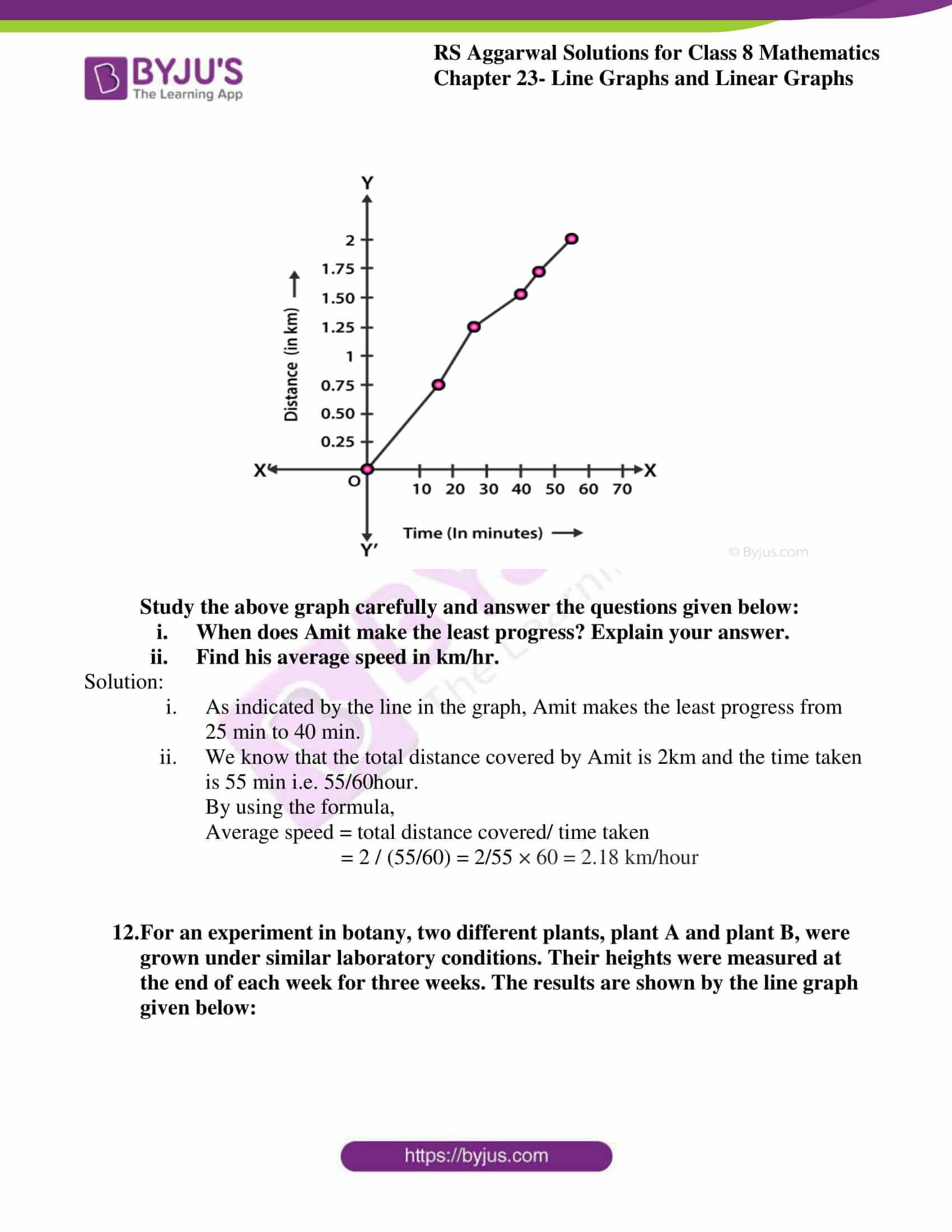 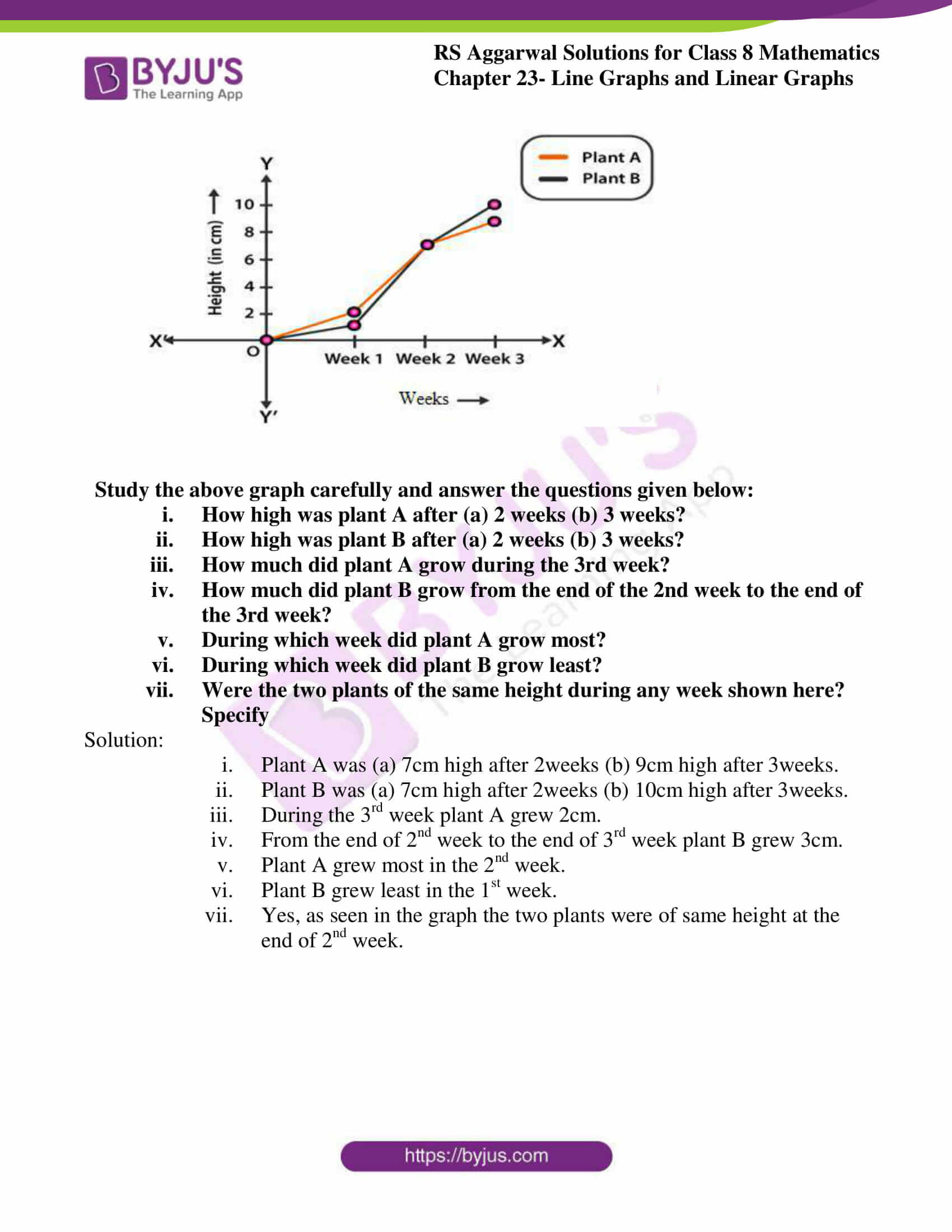 1. The following table depicts the maximum temperature on the seven days of a particular week. Study the table and draw a line graph for the same. 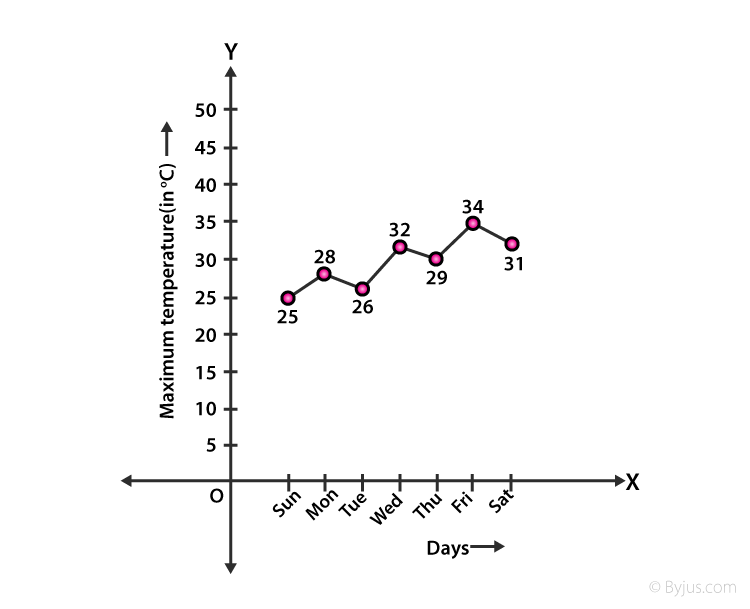 2. Consider the following input/output table. Draw a line graph for it.

Now, use the graph drawn to predict the outputs for the inputs of 3 and 8 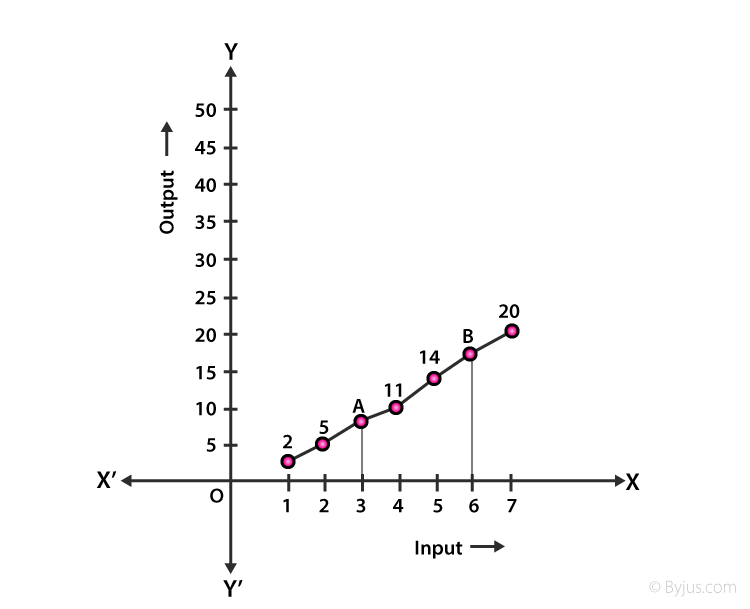 3. The table given below depicts the annual gross profit of a company for a period of 5years.Study the table and draw a line graph for the same. 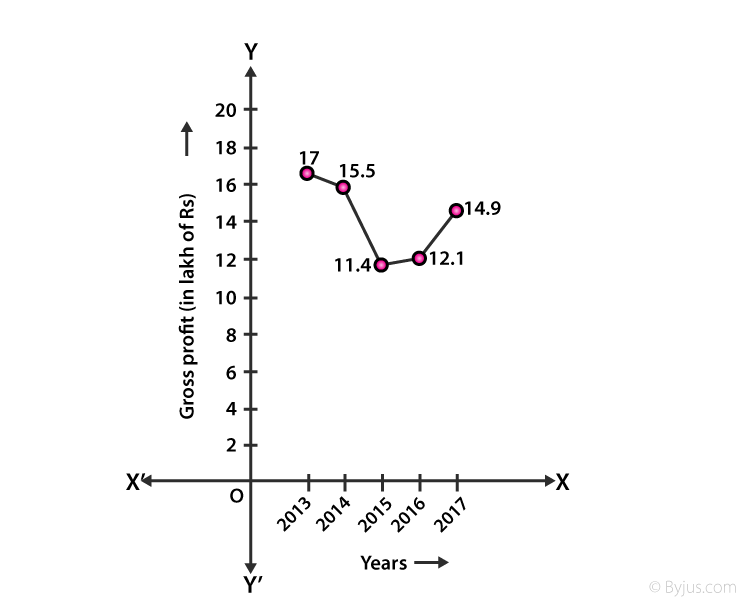 4. Ajeeta starts off from home at 7 a.m. with her father on a scooter that goes at a uniform speed of 30 km/hr. Her father drops her at her school after half an hour. She stays in the school till 1.30 p.m. and takes an autorickshaw to return home. The autorickshaw has a uniform speed of 10 km/hr. Draw the line graph for the given situation and also determine the distance of Ajeeta’s school from her home.

Solution: let’s calculate the distance of ajeeta’s school from home

We can represent it on graph as shown below. 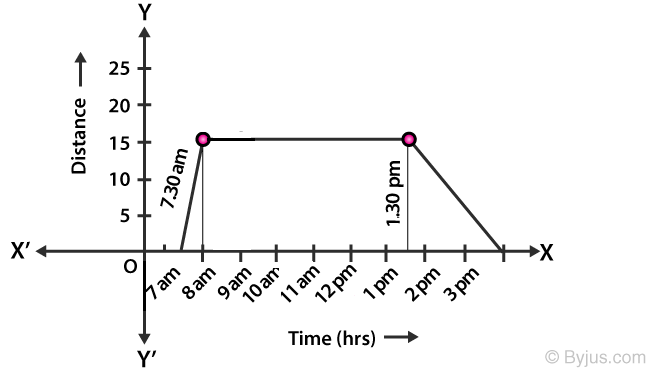 5. The following table shows the percentage of students who dropped out of school after completing high school

Study the above table carefully and draw a line graph to depict it. 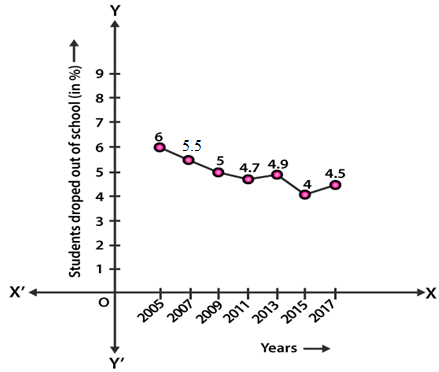 6. The following chart gives the growth in height in terms of percentage of full height of boys and girls with their respective ages.

Study the table and draw the line graph of the data given below:

Now, use the graph to answer the following questions:

(i) In which year both the boys and the girls achieve their maximum height? 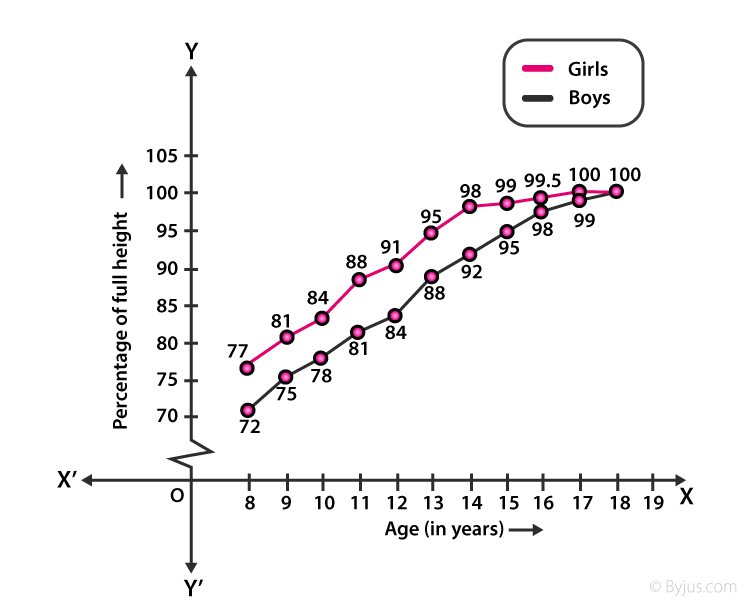 (i) In the 18th year both boys and girls achieve their maximum height.

7. A car is travelling from city P to city Q, which are 350km apart. The line graph given below describes the distance of the car from the city P at different times. 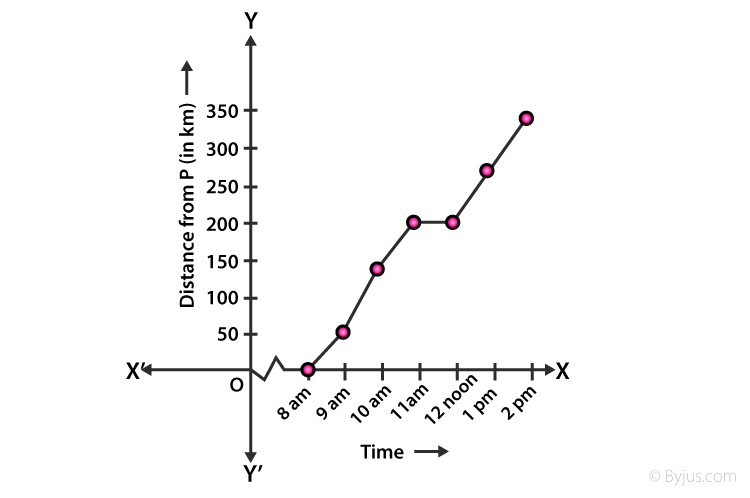 Study the above graph and answer the questions given below

(i) What information is given on the two axes?

(ii) From where and when did the car begin its journey?

(iii) How far did the car go in the first hour?

(v) Was the speed same during first three hours? How do you know it?

(vi) Did the car stop for some duration at any place? Justify your answer.

(vii) When did the car reach the city Q?

(iii) The car covered a distance of 50km in the 1st hour.

(iv) The car covered a distance of

(v) No the speed was not same, because the distance covered per hour is not uniform.

(vi) Yes, the car stopped at a place during the time interval 11a.m. to 12 noon as indicated by horizontal line segment during this period.

8. A courier-person cycles from a town to a neighbouring suburban area to deliver a parcel to a merchant. His distances from the town at different times are shown by the given graph. 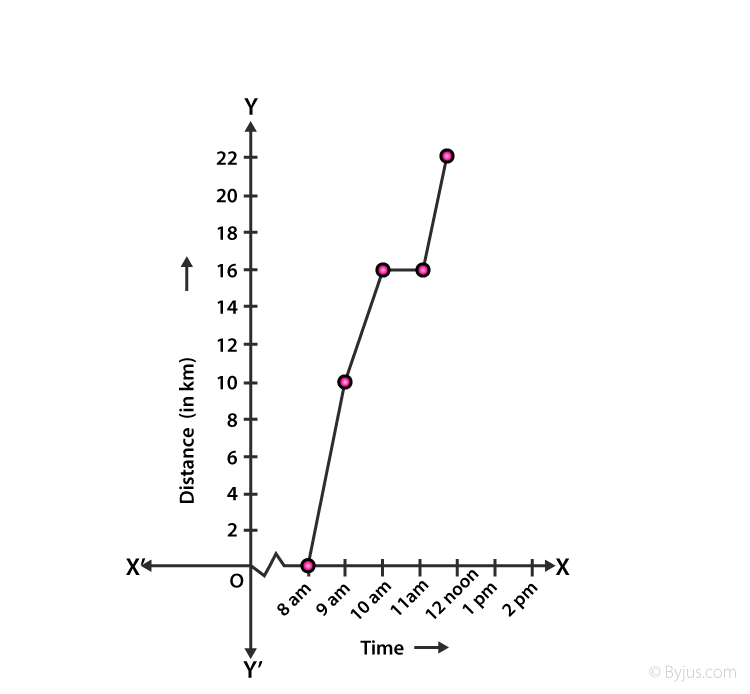 (i) What is the scale taken for the time-axis?

(ii) How much time did the person take for the travel?

(iii) How far is the place of the merchant from the town?

(iv) Did the person stop on his way? Explain.

(v) During which period did he ride fastest?

(i) The scale taken for the time-axis is 1unit=15minutes.

(iii) The distance from the town to the merchant place is 22km.

(iv) Yes, the person stopped on his way during the time interval 10a.m to 11a.m as indicated by the horizontal line in the graph.

9. A man started his journey on his car from location A and came back. The graph given below shows his position at different times during the whole journey. 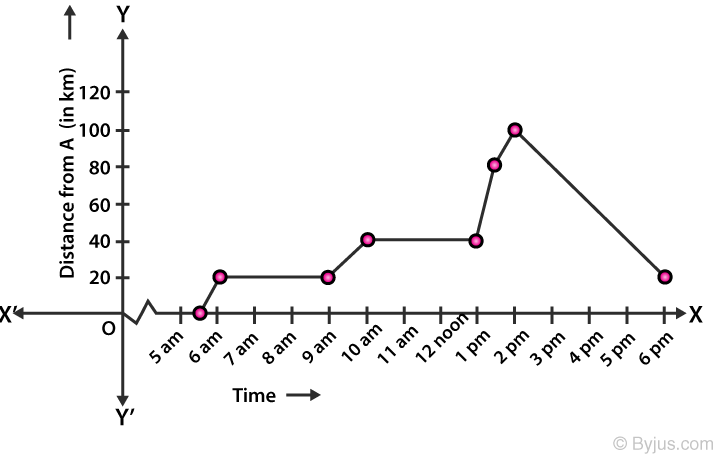 (i) At what time did he start and end his journey?

(ii) What was the total duration of the journey?

(iii) Which journey, onwards or return, was of longer duration?

(iv) For how many hours did he not move?

(v) At what time did he have the fastest speed?

(ii) The total duration of the journey was 12hour 30minutes.

10. The line graph given below shows the yearly sales figures for a manufacturing company during the last five years. 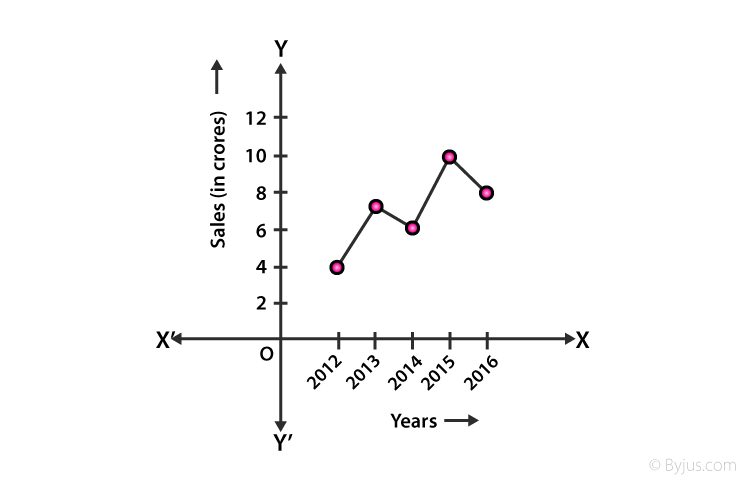 (iii) In which year was there the greatest difference between the sales as compared to its previous year?

(iii) The greatest difference of sales was seen in the year 2015.

11. The following is the distance-time graph of Amit’s walking. 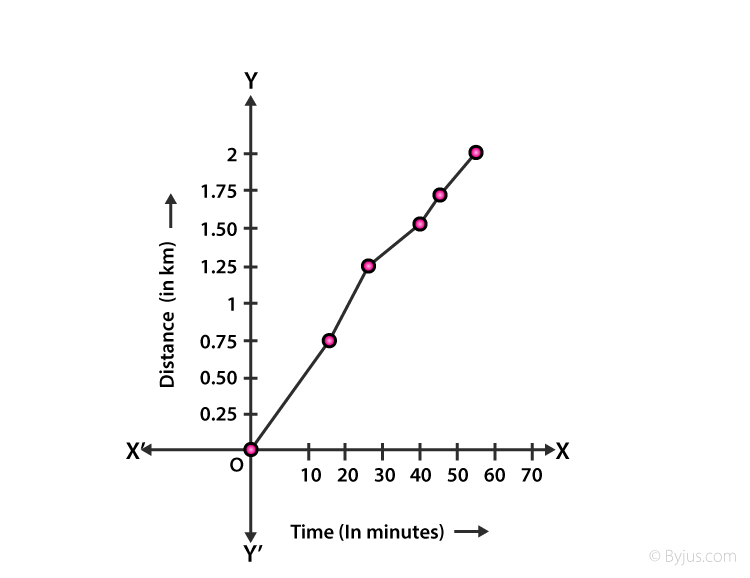 (i) When does Amit make the least progress? Explain your answer.

(i) As indicated by the line in the graph, Amit makes the least progress from 25 min to 40 min.

12. For an experiment in botany, two different plants, plant A and plant B, were grown under similar laboratory conditions. Their heights were measured at the end of each week for three weeks. The results are shown by the line graph given below: 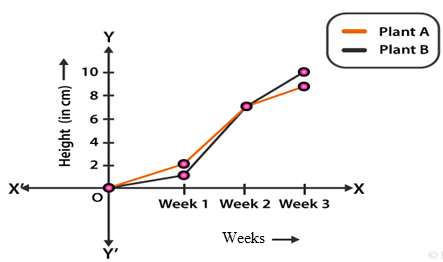 (iii) How much did plant A grow during the 3rd week?

(v) During which week did plant A grow most?

(vi) During which week did plant B grow least?

(vii) Were the two plants of the same height during any week shown here? Specify

(vi) Plant B grew least in the 1st week.

(vii) Yes, as seen in the graph the two plants were of same height at the end of 2nd week.

Chapter 23- Line Graphs and Linear Graphs, The RS Aggarwal Solutions present on this page provide the solutions for the questions present in the exercise. Now, let us have a look at the concepts discussed in this Chapter.

RS Aggarwal Solutions for Class 8 Maths Chapter 23 – Line Graphs and Linear Graphs, ensures that the students are thorough and familiar with the concepts. Regular revision of important concepts and formulas over time to time is the best way to strengthen your concepts.

As the Chapter is about Line Graphs and Linear Graphs, here we learn how to plot the Graph, draw the line graph and read the details from the Line Graph and further solve the same. In the RS Aggarwal Solutions book, many such exercise problems are given which enhance familiarity with the concepts.