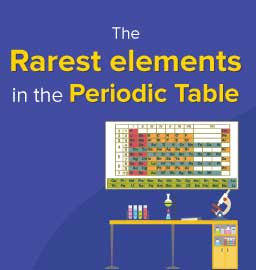 The 5 Rarest Elements on Earth

We all use different chemical elements in our lives every day without knowing them. Right from the moment we wake up till the time we hit the bed again at night, we constantly take the help of different elements and chemical compounds around us. So this month, we thought of sharing some wonders of these chemical elements with you. From trying out cool Chemistry DIY experiments with eggs, to adding some life-saving chemistry hacks in our activities, to learning about some fun facts about the elements in the periodic table. Today let’s go a step deeper and learn about some of the rarest elements found in the periodic table and their nature.

Astatine is a naturally occurring semi-metal that results from the decay of uranium and thorium. The element is highly unstable as any macroscopic specimen of Astatine produced gets immediately vaporised by the heat of its radioactivity. This makes Astatine a very rare naturally occurring element in the Earth’s crust. Considering its unstable nature, Astatine is named after the Greek word for unstable (astatos).

Oganesson is a synthetic radioactive element that is highly unstable. It has an extremely short half-life of only 0.89 milliseconds. This means that hypothetically if you had 1kg of Oganesson, it would reduce to 0.5 kg in the first 0.89 milliseconds. Within a matter of a second the entire kilo would have decayed radioactively. Only a few atoms of oganesson have ever been made, thus restricting its usage for scientific research.

Named after the city of its origin (Berkley, California), Berkelium is a transuranic radioactive chemical element (All the elements beyond uranium (Z = 92) are all synthetic elements and are known as Transuranium elements). The metal rapidly oxidised in air or oxygen at elevated temperatures, forming an oxide. Hence it is incredibly difficult to produce, and just over a gram has been produced in the United States since 1967.

Marguerite Perey discovered Francium while she was researching the radioactive decay of actinium-227. Currently, there are only 34 known isotopes of Francium, ranging in atomic mass from 199 to 232. Named after the place of its origin (France), the discovery of Francium completed mankind’s discoveries of naturally occurring elements.

The word Protactinium comes from the Greek word protos, meaning the first, and actinium, which is the final product of protactinium’s radioactive decay. The element is dangerously unstable, highly radioactive and also has a high toxicity.

Do you know any rare-earth elements? Do let us know in the comments below.