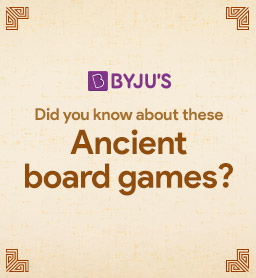 It has been months now since the nation went into a lockdown mode. During this time, we all have picked up a hobby or two, learned a new skill, or played an interesting indoor game to spend our time at home. Did you know that games have always been an important part of Indian culture? During the times of kings and queens, several games were actually part of teaching tools and were important markers of social status.

Today, let’s look at some remarkable Ancient Indian games that were played indoors.

The game of chess was invented in India centuries ago. One of its earliest forms was called Ashtapada (meaning sixty-four squares) and was played on an 8×8 board. Other variants of this game were called Dasapada (played on a 10×10 board) and Saturankam (played on a 9×9). Unlike a regular chessboard with black and white squares, Ashtapada was played with dice on a mono-coloured checkerboard. Not much is known about how exactly Ashtapada was played but experts speculate that it involved some form of racing around the board much like Ludo, along with some elements of modern chess.

The game lost its importance around the 4th century B.C. when Gautam Buddha added it to the list of activities that could “spoil the spirit of wise men and make them plunge into violence, and hence should be avoided.” Interestingly, although the game faded from existence, what remained is the iconic board on which it was played. In fact, the common 8×8 black-and-white checkered board on which chess is played today was called ‘ashtapada’ well into the 7th century A.D. Historical texts like Amarasimha’s Amarakosa and Banabhatta’s Harshacharita note how chess was played on an ‘Ashtapada’.

Pallankuzhi (‘Pal’ means ‘many’ and ‘kuzhi’ means ‘pits/holes’) was one of the most common board games of ancient India. The game was widely played in Tamil Nadu and northern Sri Lanka and later became popular in states like Andhra Pradesh, Karnataka, Kerala, and even Malaysia. The board game is designed in a rectangular wooden board with two horizontal rows and seven vertical columns. There are 14 pits or holes on the board and 146 counters. Usually, cowry shells, small pebbles, stones, or tamarind seeds are used as counters. A game for two people, Pallankuzhi is based on mathematics and is useful for children to learn hand-eye coordination along with counting and reasoning.

Gutte is a traditional game of India, which is played both by children and elders. The game involves five small stones or pebbles that each player needs to spin in the air. The game begins with a player spinning a stone in the air while gathering the remaining stones, lying on the floor with one hand, without allowing the one in the air to fall on the ground. Next, the player needs to throw two stones in the air and collect the remaining stones, and so on. Gutte is an interesting game to play centred around hand-eye coordination and reflexes, best enjoyed with a small group of friends.

The Lambs and Tigers Game was a popular game of ancient India. A perfect mind puzzle game for children, it is a two-player strategy game that requires sharp memory power and keen observation. The game is asymmetric, in that one player controls three tigers and the other player controls up to 15 lambs or goats. The tigers try to hunt the goats as the goats try to save themselves and block the tigers’ movements.

Once called the ‘national game of India’, Pachisi (meaning twenty-five, the largest score that can be thrown with the cowrie shells) finds its mention in the Indian historic epic like Mahabharata and the Mugal courtroom of Akbar. A game for two-four players, the board game is spread on a cloth-like asymmetrical cross. The moves of the players are determined by throws of cowrie shells or dice. Strategy, tactics, counting, and probability are some of the skills required to tactfully win in this game. Although the game of Pachisi has been around since the Medieval times, its more recent version is the board game of Ludo.

India had several princely states before the British invaded. The royal families had several leisurely tastes and hobbies that included hunting, painting and playing games. One common game that entertained both the royals and the commoners was the card game of Krida-Patram. The earliest versions of Krida-Patram cards were made of clothes and depicted motifs from Indian epics like Ramayana and Mahabharata.

By the time the Mugals came into power, they introduced a new variant of this card game and called these cards as ‘Ganjifa’, although the game was still known as Krida-patram. Unlike the modern cards, these cards were traditionally painted and were completely handmade, which demanded a considerable amount of patience and hard meticulous work. At times, the kings even commissioned painters to make cards as per their preferences. Later on, the Ganjifa cards took to new forms where cloth materials were replaced by tortoise shells or ivory and decorated with pearls, precious stones, and metals.

Sports and games have always been an integral part of India. Games are one of the oldest forms of human social interaction. Playing these games not only helped an individual develop their imagination power and analytical skills, it also served as a source of recreation. But it was not always all fun and games! At times, these games were also used to strategise a kingdom’s army and even plan out a war!

Which is your favourite indoor game of all time? Do tell us in the comments below.