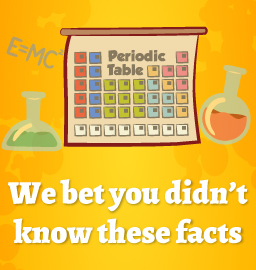 7 Things you should know about the Periodic Table

You may remember the elaborate Periodic Table of Elements as the most confusing chart on your study table wall. But did you know it is actually a giant cheat sheet? Yes! You read it right. Serving as an indispensable roadmap for chemistry students since 1869, the modern-day Periodic Table was an art of mastery by the genius professor Dmitri Mendeleev.

You are probably familiar with the most common elements on the periodic table – hydrogen, helium, nitrogen, oxygen, and so on. But today we will go deeper and look for some interesting, fun, and little-known facts about the modern Day Periodic Table.

The periodic table gets its name because of the way the elements are arranged – in rows and columns. The horizontal rows which go from left to right are called ‘periods’ and the vertical columns which go from up to down are called ‘groups’.

The element Astatine (At) is the rarest naturally occurring element on Earth. With the atomic number 85, and carrying the atomic weight of 210, Astatine is present in less than 1 gram in Earth’s crust at any one time. Discovered in 1940,  very little is known about this highly radioactive element.

In 2016, four newly discovered elements were given their official names and position in the Periodic Table. The International Union of Pure and Applied Chemistry (IUPAC) approved their names and positions as Nihonium (113), Moscovium(115), Tennessine(117), and Oganesson(118). These elements were named either after their places of discovery or their creator. For example, three of the elements were named after the location of their scientist’s institutions: Tennessine (Tennessee), Nihonium (Japan), and Moscovium (Moscow). The fourth element Oganesson was named after Yuri Oganessian, a nuclear physics professor at the Joint Institute for Nuclear Research, Moscow.

The element 101 is named after the father of the modern Periodic Table as Mendelevium. A radioactive element that is made in small amounts, Mendelevium has no specific uses so far outside of scientific research due to its fleeting nature.

While creating the earlier version, the periodic table had blank spaces for elements to be discovered later on. Mendeleev correctly predicted the weights and chemical behaviours of some of these missing elements — gallium, scandium, and germanium. To name these three elements, Mendeleev borrowed Sanskrit terminology – ‘eka’, ‘dvi’, ‘tri’—for the first, second and third higher analogues and named the elements as eka-aluminium (for gallium), eka-boron (for scandium), and eka-silicon (germanium).

Dmitri Mendeleev was very fond of card games. That’s why while aligning the elements on the Periodic Table, he wrote the weight for each element on a separate index card and sorted them in the style of the popular card game Solitaire. Elements with similar properties formed a “suit” that he placed in columns ordered by ascending atomic weight.

According to the naming guidelines, the elements in the Periodic Table are named after:

Like to read more weird, but true facts? Read here:

Weird, but True: Can you make sense of your senses?

Weird, but True: 7 unusual salutations from around the world