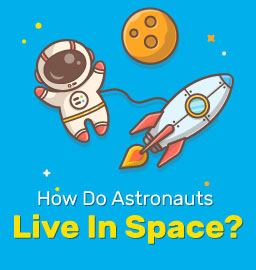 How Do Astronauts Live In Space?

Have you ever wanted to be an astronaut? Renowned astronauts like Neil Armstrong, Buzz Aldrin, Kalpana Chawla, and Sunita Williams have made us all curious about space travel, but do you know what it’s like to actually live in space?

Today, we’re going to walk you through a regular day on one of the oldest and most famous space stations out there, so you know what it feels like to be a space explorer yourself!

The International Space Station (ISS) is an artificial satellite that orbits the earth and acts as a laboratory for low gravity experiments. Currently, five space research organisations are working on the ISS. They are NASA from the USA, Roscosmos from Russia, JAXA from Japan, ESA from Europe, and CSA from Canada.

Astronauts are sent to the ISS to conduct experiments on biology, astronomy, physics, and various other topics. On average, an astronaut stays on the ISS for six months, and there are three to six astronauts on the ISS at all times.

How do these astronauts go about their daily activities in space? Let’s find out!

For earthlings, it’s easy to know the right time to sleep and wake up because the sun helps track the day with a sunrise and a sunset. But on the ISS, an astronaut sees 16 sunrises and sunsets in 24 hours! This is because the ISS orbits the earth at a speed of 27519 km/hr. Therefore, in 24 hours, the ISS goes around the earth 16 times. To keep track of the day, the ground staff of the space research organisations alerts the astronauts when it’s time to sleep and wake up. Once they receive the alert, the astronauts jump into their sleeping bags, make sure it’s hooked to a wall (to prevent them from floating away) and get some restful sleep.

Once awake, astronauts have to start their morning routine of brushing, using the toilet and taking a bath. In space, water doesn’t flow like a liquid. Instead, it forms round, bubble-like beads. Astronauts use a few beads of water to brush (their toothbrush and toothpaste remain the same as on earth) and then spit out the toothpaste into a paper towel or sometimes swallow it (not recommended for earthlings).

Taking a bath in space is not as comfortable as on earth because there is no gravity to drain the water off your body. Astronauts use rinseless shampoos, liquid soap, and beads of water to cleanse themselves and wipe off excess water with a towel.

A toilet in space consists of vacuum devices that help in sucking the waste into a tube once it’s outside the body.

Once the astronauts are ready for the day, they need to eat a nutritious meal to help them work on the space station. Astronauts are sent freeze-dried, dehydrated, pre-cooked meals at the start of the journey. Freeze drying food removes close to 97 percent of the water from the food, making it lighter and easier to send more food to space. The astronauts simply need to add water and heat up the food before eating it.

Food that crumbles or breaks into small pieces easily is not preferred because the crumbs can float away and get stuck in equipment on the space station. This makes tortillas (the South American version of roti), a favorite in space since it doesn’t crumble easily and can be eaten with a lot of different things. Salt and pepper are also given to astronauts in liquid form for the same reason.

Astronauts live an exciting life up in space and they contribute to important scientific work. They give up on the small luxuries of a daily routine to contribute to the cause of science.

What surprised you the most about their routine? Let us know in the comments.